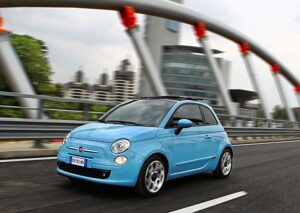 Downsizing is taken to an extreme in the quest for better fuel economy.

At the center of the Fiat display at the upcoming Paris Motor Show will be four of the diminutive 500 models equipped with two-cylinder engines. That’s right two.

Fiat Powertrain Technologies has developed a 900 cc engine with direct injection and turbocharging that delivers 85-horsepower and 145 Nm torque. The tiny powerplant is dubbed TwinAir after the already in production MultiAir system(gasoline direct injection), and is just starting to be available in Europe in 500 sedan and convertible models.

The performance of the twin-cylinder is roughly the equivalent to a traditional 1.4-liter 16 valve engine, but its fuel consumption is said to be 30% less. 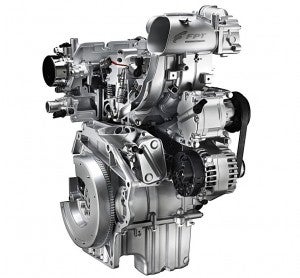 A two-cylinder might actually make the most sense in a hybrid as an onboard recharger.

The two-cylinder 500 models are showcasing a new family of two-cylinder engines that build on MultiAir technology and also use a start-stop system to turn the engine off at idle.

Fiat says it is taking the concept of downsizing to the “extreme.” No argument here, as the new engine line is projected to deliver from 65 to 105 horsepower. Fiat claims the engines emit 30% less CO2 (a direct function of fuel consumption with a carbon based fuel) than an engine of equal performance. The engine could be the cleanest gasoline engine in the world with its CO2 emission levels of 92 g/km with a “Dualogic” automatic transmission and 95 g/km with manual gearbox.

The 500 with TwinAir also comes with an “ECO” button on the instrument panel, which trims torque output to 100 Nm at 2000 rpm to decrease fuel consumption.

Fiat is also working on a methane fuel system, which will appear shortly, and various hybrid technology combinations. Because of its reduced size, the TwinAir might make the most sense when mated with electric motor as the onboard recharging unit in a hybrid EV, not unlike the design of the larger Chevrolet Volt.