Electric motorbike offers CO2 free mobility – depending on how the recharging juice is generated, that is. 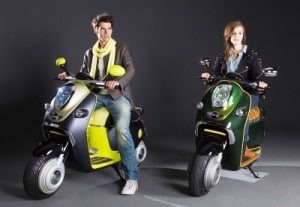 Can BMW transfers Mini’s driving fun and premium pricing to the two-wheel segment?

Mini will introduce a Scooter E Concept at the Paris International Motor Show next month. It could be the premium small car brand’s first two-wheel vehicle.

The electric drive unit, concealed beneath a painted cover inside the rear wheel, is powered by electricity supplied from a lithium-ion battery pack. Apart from the compact battery, a charging system and connecting cable are integrated in the rear of the Scooter E Concept. The charging cable has a plug which fits into a conventional domestic socket. This has a potential advantage of eliminating higher voltage special charging stations but will drastically increase the time to recharge the scooter.

Plugs and cables are accommodated underneath a cover similar to the round tank flap in a Mini car. After opening the illuminated flap, the plug and charging cable can be pulled out to a length of five meters. After the battery has been charged up, a button-operated spring mechanism ensures that the cable is retracted and coiled in a space-saving compartment. However, no range or performance or pricing data were released.

The cockpit of the Mini Scooter E Concept has a “Centre Speedo” in the circular shape of the four wheel Minis, with a smartphone integrated in the middle. The wraparound speedometer is in the form of a tube filled with fluid, the content expanding in line with the speed like a thermometer. In the lower area of the Centre Speedo, a battery charge level display indicates the range currently available. The design of all the control elements for lights, directional indicators and other driving functions corresponds to the buttons on the multifunction steering wheel of Mini cars. 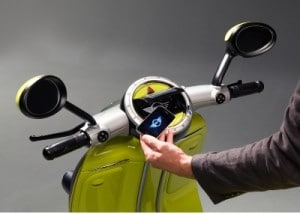 The inside of the round instrument comprises a snap-in adapter for a smartphone, which operates simultaneously as the vehicle key, display and central control element. As soon as the rider docks his mobile phone and switches it on, the vehicle is ready to go. This configuration provides infotainment, communication and navigation functions in a two-wheeler.

While the scooter is in motion, the smartphone can be used as a navigation system, music player or telephone as required. A wireless Bluetooth interface can be connected to a helmet from the Mini Collection. This is fitted with a microphone and headphones so that riders are able to use the telephone function or access their personal music collection while on the road. By the time the concept becomes reality, Driver Distraction regulations coming in the U.S. will likely require the disabling of the cell phone.

BMW claims that clearly defined proportions and contoured lines give the Scooter E Concept an aesthetic appearance that parallels the brand’s cars. The 11-inch rims of the MINI Scooter E Concept give the study a “powerful and robust” appearance, emulating the profile of Mini cars. The alignment of the contours enhances this impression from the side by clearly defining the front and rear of the vehicle before sweeping up towards each other at virtually identical angles. The windshield of the Scooter E Concept is angled in an upright position similar to that of the front windshield in Mini cars. The curvature designed into the sides also displays parallels with the transitions of a windshield in the Mini as it merges into the A-pillars.