New distracted driving regs and employer policies coming. Technology both vilified as a cause and praised as a solution. 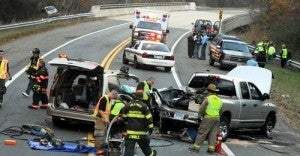 It's clear that technology causes the DD problem; there is little data showing that it can solve it. The vehicle is not a mobile device say critics.

LaHood said that he is initiating a new rulemaking to prohibit commercial truck drivers from texting while transporting hazardous materials. In addition, LaHood said that two rules proposed at last year’s summit have now become law – rules banning commercial bus and truck drivers from texting on the job, and restricting train operators from using cell phones and other electronic devices while in the driver’s seat.  More than 4,000 people died in heavy truck crashes in 2008, but only 15% of them were in the trucks.

“We are taking action on a number of fronts to address the epidemic of distracted driving in America,” said Secretary LaHood.  “With the help of the experts, policymakers, and safety advocates we’ve assembled here, we are going to do everything we can to put an end to distracted driving and save lives.”

More than 100 million people each day are now engaging in dangerous distracted driving behavior or DD. In 2009, nearly 5,500 people died and half a million were injured in crashes involving a distracted driver. According to National Highway Traffic Safety Administration (NHTSA) research, distraction-related fatalities represented 16% of overall traffic fatalities in 2009.

Since the National Highway Traffic Safety Administration is prohibited by law from enforcing standards on driving behavior – this power resides in state legislatures with elected politicians, who thus far are reluctant to ban cell phones – LaHood has been using his “bully pulpit” to call attention to what he calls an epidemic. LaHood criticized automakers for not doing enough about the problem.  And LaHood also called on the U.S. Congress to pass national legislation on DD by banning texting.

“Every time someone takes their focus off the road — even for a moment — they put their lives and the lives of others in danger,” said LaHood.

The big current issue is cell phone use with safety advocates arguing, backed up with research, that the cognitive distraction from using any cell phone should be banned. The auto and electronics industry are pushing for driver education and hands free phones, all the while adding more and more electronic features that enable distracted driving, such as Ford Motor Company’s Sync system. Sync reads e-mail to drivers while they are behind the wheel.  LaHood wants Sync and other such systems out of cars or disabled while they are running, and even has personally called Ford CEO Alan Mulally to complain that Ford is promoting DD. (See BMW to Offer Incoming E-Mail with Voice Output or Smart Phones Add to Distracted Driving Epidemic or New OnStar Services Launch Monday despite DD )

The DOT has also been working with the Network of Employers for Traffic Safety (NETS) within the private sector to promote anti-distracted driving policies in the workplace. NETS, created by the National Highway Traffic Safety Administration (NHTSA) which is part of DOT, is an employer-led public-private partnership trying to improve the safety of employees by preventing traffic crashes. The DOT and NETS today announced that almost 1,600 U.S. companies and organizations have adopted distracted driving policies so far, covering approximately 10.5 million workers nationwide.

The National Highway Traffic Safety Administration (NHTSA) also released interim data from its pilot enforcement programs currently underway in Hartford, Connecticut and Syracuse, New York. Dubbed “Phone in One Hand, Ticket in the Other,” the year-long pilot campaigns were launched in April to test whether increased law enforcement efforts combined with public service announcements can succeed in getting distracted drivers to put down their cell phones and focus on the road. (See Distracted Driving Ticketing Campaigns Underway)

During two week-long periods of stepped up enforcement, police in Hartford have written approximately 4,956 tickets and Syracuse police have issued 4,446 tickets for violations involving drivers talking or texting on cell phones. Before and after each enforcement wave, NHTSA conducted observations of driver cell phone use and collected public awareness surveys at driver licensing offices in each test and comparison site. Based on these observations and surveys, hand-held cell phone use has dropped 56% in Hartford and 38% in Syracuse to date. Texting while driving has declined 68% in Hartford and 42% in Syracuse.

“Good laws are important, but we know from past efforts to curb drunk driving and promote seatbelts that enforcement is the key,” said Secretary LaHood. “Our pilot programs in Syracuse and Hartford are critical pieces of our overall effort to get people to realize distracted driving is dangerous and wrong.”

Not all agree with this approach

The risk of phoning and texting while driving is substantial, according to the Insurance Institute for Highway Safety. Policymakers are right to address these issues, but they’ve gone off on a sidetrack by focusing solely on laws prohibiting phone use. Such laws reduce phoning, but there’s no effect on crashes, according to IIHS. In jurisdictions where driver use of hand-held phones has been banned, crash patterns have held steady.

“Reducing crashes and saving lives is what highway safety is all about,” said Adrian Lund, the president, “and by this essential measure the benefits of hand-held cellphone bans are nil. Policymakers aren’t listening. In state after state they’re enacting new bans, and no less than the U.S. Department of Transportation says it’s “irresponsible to suggest” that these bans “have zero effect on the number of crashes.”

Lund counters that “we’re not suggesting anything. This is a data-driven finding, and the data show the same thing across every state we’ve studied — no reductions in crashes after banning driver phone use.”

This position plays into the hands of the technologists looking for the “next big thing.” Active safety systems such as lane departure warnings, automatic collision warning and then automatic braking, allegedly can help. All of  these types of systems are under development.

However, any way you look at it, safety requires a responsible driver. It’s clear that technology causes the DD problem; there is little to no data showing that technology can solve the problem. The motor vehicle is not another mobile device in the view of safety advocates. Government safety regulators are  calling for more research. Effectiveness should be judged by their ability to divert driver’s attention back to the road. This begs the core question – why help drivers  get distracted in the first place?