Is this the first time a 3-D promo is broadcast to a public space? 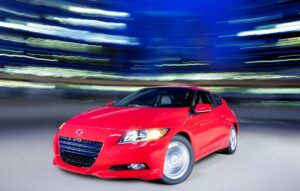 This is the latest example of automotive marketing moving from traditional media.

Honda will hold what it says is the first-ever takeover of Times Square with  3-D technology to launch the CR-Z sport hybrid coupe tomorrow.

The marketing event marks the first time 3-D footage will be broadcast to the public space, in this case five blocks of Times Square in New York City, according to Honda. No matter about the claim, it is the latest indicator of how event marketing is changing automotive advertising and promotion, with a clear shift from traditional broadcast and print outlets to so-called new media.

As a part of the takeover, Honda will run 3-D CR-Z commercial footage on the Times Square HD Spectacolor (sic) screen located on Broadway between 46th and 47th Street. Sony will provide 3-D Gran Turismo 5 racing simulators. Honda will also sponsor a special performance from the hip-hop trio N.E.R.D.

The Times Square CR-Z event will run from 10 a.m. to 6 p.m. EST, with N.E.R.D. taking the stage at 12:30 p.m. to perform. Attendees will receive special glasses to view the 3-D CR-Z television commercial footage. They will also have the opportunity to “interact” with the all-new CR-Z sport hybrid coupe. Other on-site activities include live screen printing, 3-D photo booths and prize giveaways.

“To bring attention to the duality of sport and hybrid that the CR-Z offers, the advertising campaign relies on a bevy of non-traditional elements – like 3-D technology – to get the attention of young, potential CR-Z buyers,” said Tom Peyton, senior manager of national advertising, American Honda Motor Co., Inc. “This 3-D experience in Times Square uniquely integrates advertising, gaming and music into a single, memorable event.”

The 2011 Honda CR-Z sport hybrid coupe went on sale August 24th with a manufacturer’s suggested retail price (MSRP) starting at $19,200, plus a destination and handling charge of $750.