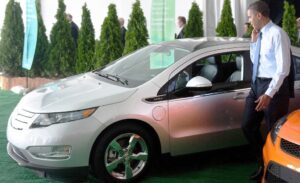 Volt has a claimed total driving range of 340 miles.

In what will be the largest market test for expensive electric vehicles in the U.S. since General Motor’s Impact or EV1 of more than a decade ago, Chevrolet announced today that the Manufacturer’s Suggested Retail Price of the Volt starts at $41,000, including a freight charge of $720. The price is $33,500 if, big if, the buyer qualifies for a full federal income tax credit that ranges from $0 to $7,500.

This is roughly $8,000 more than the Nissan Leaf EV, which has a similar roll-out plan for the U.S. also starting late this year. The pricing is aggressive on GM’s part, and no doubt meant to recover something close the the Volt’s cost to produce, not including the  program cost which could easily run to $1 billion.

Nissan has not yet released its warranty details, but it has released pricing. Including the maximum $7,500 federal tax credit for which the Leaf is also eligible, the consumer’s after-tax net cost of a Leaf could be as low as $25,280. The Manufacturer’s Suggested Retail Price is $32,780. Leaf leasing begins at $349 per month.

Taxpayers are providing massive subsidies to help overcome the objections of potential buyers for what are now and for the foreseeable future high cost, limited range electric vehicles, including tax credits of up to $7,500 per vehicle to purchasers, as well as a variety of subsidized infrastructure changes. (See Taxpayers to Subsidize EVs and Charging Stations)

Chevrolet dealers in the initial launch markets can begin taking customer orders today. A lease program is offered with a monthly payment of $350 for 36 months calculated at MSRP with $2,500 due at lease signing, including security deposit based on current conditions, which GM cautions could vary at time of delivery. Lessees beware – the benefit of the $7,500 taxpayer funded credit is included in the reduced lease payment, with the tax credit going to GM.

“The Chevrolet Volt will be the best vehicle in its class…because it’s in a class by itself,” said Joel Ewanick, the new vice president of U.S. marketing for General Motors, who just jumped from a senior marketing position at Nissan where he was working on the Leaf roll-out.

Ewanick made the announcement at the Plug-In 2010 conference. “No other automaker offers an electrically driven vehicle that can be your everyday driver, to take you wherever, whenever,” he claimed, taking a clear shot at Leaf’s limited 40-mile range.

Volt has a claimed total driving range of about 340 miles. For up to the first 40 miles, the Volt operates using electricity stored in its 16-kWh lithium-ion battery, which costs more than $10,000 at current prices.  When the Volt’s battery runs low, a gasoline engine drives a generator to extend the driving range another 300 miles on a full tank. In essence GM engineers have solved the Impact’s limited range woes by adding an onboard recharging station – aka a gasoline engine – running on fossil fuel.

GM’s Volt announcement comes on the tenth anniversary of the Toyota Prius hybrid’s first appearance in North America during July of 2000. That year, the talk of the North American International Auto Show in Detroit was the Hummer H2, and national gasoline prices averaged about $1.50 per gallon.

Extreme environmentalists are no longer in favor of hybrids with  proven high mileage capability of 35 mpg or more in urban and suburban conditions. Instead they are promoting EVs in spite of the fact that large issues remain over the availability of electricity, and how it is produced. In the U.S., 50% of power is currently produced by burning coal, the dirtiest fossil fuel available.