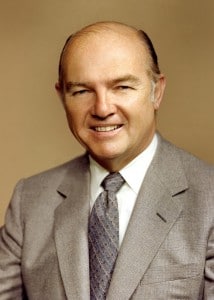 While his career spanned much of the post-World War II auto boom, former General Motors President F. James MacDonald may best be remembered for the time he served as the maker’s second-in-command, a period during which it suffered some of its sharpest declines, both in terms of image as well as market share.

Jim McDonald, who died Sunday, at 87, was named president of GM on February 1, 1981, a position he held until his retirement on August 31, 1987. But the Michigan native spent those years in the shadows of the automaker’s hard-charging chairman and chief executive Roger B. Smith, a man intent on putting his stamp on every aspect of the giant manufacturer’s operations.

With a leprechaun-like face, McDonald was known as a man who could alternative a gruff charm with a fierce temper.  He was not known to suffer fools – or critics – lightly, once suggesting skeptics who questioned his optimistic forecast were “smoking opium.”

Born on August 3, 1922, in Saginaw, Michigan, Jim McDonald was the classis GM executive, raised in a company town, then educated at the automaker’s own school, the General Motors Institute (now Kettering University), in Flint, Michigan, where GM was founded.

He left Michigan during the War, serving as an engineering officer in the submarine service, an assignment that landed him aboard two different subs operating out of the Pacific.

After leaving the Navy in 1946, McDonald quickly returned to Michigan – and GM – landing at the Saginaw Malleable Iron Division, and then working his way up the proverbial corporate ladder.  Though trained as an engineer, he was rapidly rotated through a series of manufacturing, production, control and sales positions.  It was clear he was “fast-tracked” when, in 1969, McDonald was named general manager and vice president of the Pontiac Division, then one of the most successful and well-celebrated of the maker’s North American brands.

McDonald stayed at Pontiac for three years before taking over the even more powerful Chevrolet.  He was named an executive vice president and appointed to the GM board in 1974.

It was the beginning of a traumatic era for not only General Motors but the domestic auto industry as a whole, which would soon be rocked by a pair of oil shocks that would at times leave American motorists waiting in gas lines for hours.  As the decade dragged to a painful end, drivers began demanding smaller, more fuel-efficient automobiles – precisely the sort that a new cadre of Asian imports had on their lots.

Like most Detroit executives, McDonald downplayed the threat, though he did begin to recognize that Japanese quality would be as much a differentiator as their cost and mileage advantages.

Working with CEO Smith, the GM president began to attack a variety of inherent problems at the company.  Under their leadership, the automaker announced the most far-reaching reorganization in its history, abandoning classic divisions, such as Fisher Body, and grouping its various brands into two groups: Chevrolet-Pontiac-Canada and Buick-Oldsmobile-Cadillac.  (Known as CPC and BOC, wags preferred the snarky “Cheap Plastic Cars” and “Big Overpriced Cars.”)

With Smith in the lead, the maker made several major acquisitions, notably including Texas-based EDS, an electronic services company headed by H. Ross Perot, who became a board member and a constant critic of GM’s strategies under Smith and McDonald.

GM also announced plans to create an all-new division.  Intended to directly take on the Asian imports with a new generation of small, plastic-bodied cars, Saturn didn’t deliver its first product, however, until after McDonald’s retirement.

But the company did roll out an assortment of new, downsized products – leading to the coinage of the term, “badge engineering,” after Fortune magazine ran a cover story featuring an assortment of seemingly identical cars on its cover.  From each of the maker’s various divisions, they could only be differentiated by their brand badges.

Despite spending tens of billions of dollars on new plants and products, McDonald’s tenure saw a nearly steady decline in market share for what was then the world’s largest automotive manufacturer.  And, as his career drew to a close, the executive became openly more cross with his critics.

At a luncheon, during the February 1987 Chicago Auto Show, McDonald was questioned about his projection that GM would end the year with a strong 41% market share.  Industry analysts had forecast something closer to 36%.  Asked what he would say to those skeptics, McDonald growled, “I’d tell them they’re smoking opium.”

The final 1987 numbers came close to the most pessimistic expectations.

McDonald is survived by his wife of 66 years, Betty, three children, seven grandchildren and four great-grandchildren.