Should You Buy a Hybrid or Battery Car?

A high price up front can save you money at the back end. 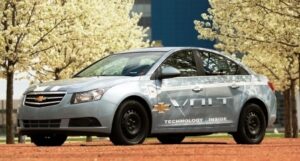 What's the actual cost of driving a battery car like the 2011 Chevrolet Volt? That likely depends on how and where you drive.

Reader Terry Beamon had a simple comment regarding my recent review of a prototype Chevrolet Volt.  “I think the price is too high for the average buyer,” he complained.

I’ve heard that a lot from folks, whether they’re reacting to the reported $40,000 price tag for Chevy’s extended-range electric vehicle, or a more conventional hybrid, like the Toyota Prius, Honda Insight or Ford Escape Hybrid.  The simple fact is that most of these vehicles carry a premium over an otherwise comparable, gasoline-powered automobile – unless the manufacturer is subsidizing the product, as most analysts believe Toyota did with the first-generation Prius.

The problem, says Tony Posawatz, line director for the Volt, is that “first-generation technology is usually quite expensive.”  And nowhere is that more true than when it comes to battery power.  The latest lithium-ion cells cost as much as $1,000 a kilowatt-hour, or kWh.  The Volt has about 16 kWh of batteries onboard; the Nissan Leaf, a pure battery-electric vehicle, or BEV, has 24 kWh.  If you’re troubled with the math, pull out your calculator.  Spoiler Alert: you will need this in a moment.

The fact is most makers are likely to offset some of the costs of battery power to help spur demand.  They also know that as with computer technology, battery costs will come down, if not nearly as fast.  The Boston Consulting Group predicts lithium, or LIon, technology will dip to $40 a kWh by decade’s end.  Others believe that will drop as low as $250 and that, says David Cole, director of the Center for Automotive Research, “will put battery drivetrains roughly at par with the internal combustion engine.”

Okay, you’re likely saying, I can wait for 2020.  But what if you’re considering a hybrid, plug-in, E-REV or BEV sometime sooner? Like maybe right now?  There are, of course, plenty of folks who will buy a Prius, Volt or Leaf just to be kind to Mother Nature.  But if battery technology is to go mainstream, it needs to make economic sense, as well.

For some folks it will, but not everyone.  That will likely depend on such things as the avilability of tax credits, as well as what, where and how you drive.

Volt and Leaf both will qualify for $7,500 tax credits.  If, as expected, Chevy brings out its new E-REV at $40,000 that effectively brings the price down to $32,500 – still a hefty premium over comparable sedans.

The automaker anticipates that the typical buyer will drive 90% of the time on battery power – Volt will get up to 40 miles per charge – the rest using gasoline.  At current fuel prices, and estimating total driving of 15,000 miles annually, the yearly cost for gasoline would come in at about $100 for gas, and somewhere between $150 and $250 for electricity.  (That assumes a Volt owner charges up at night using special off-peak rates, averaging about one to two cents per mile.)  In other words, we’re looking at an annual energy cost we’ll round to $300.

The typical gasoline-powered vehicle costs anywhere from eight to more than 20 cents per mile to fuel up.  Even erring towards the low side that works out to around $1,500 annually for a Volt-sized automobile.

The next step is to spread the savings over the entire ownership cycle, typically more than seven years, which means a savings of around $8,400 and perhaps $10,000 or more.  (And with petroleum prices likely to keep rising, the gap is certain to get larger.)

By this measure, the effective price of the Volt drops to the mid-$20,000 range.

Now, there are plenty of other factors we could work in, such as maintenance, resale, and so on, but this is a good start for making a comparison.  You’ll have to figure out the numbers for factors like helping the environment – never mind getting access to the car pool lane on your local freeway.

One other thing to keep in mind: not just how much you drive but where you drive.  Hybrids, like Prius, tend to get their best mileage around town, where stop-and-go driving recharges their batteries.  That’s completely opposite what occurs with a conventional, gasoline-powered car or truck.  So, if you’re a long-distance cruiser, rather than an urban or suburban commuter, your savings could be significantly less.  The same with the Prius.  Data show the typical commuter will clock less than 40 miles a day, but if you put on 50, 70, 100 miles between charges, spending most of your time driving Volt, or some other plug-in hybrid, using gasoline, the savings will quickly evaporate.

The reality is that there’s a premium for going green, but not always as much as it might seem up-front.  Do the math and you may come up with dollars that make sense.