Panels can fly off during driving because of a bad adhesive. 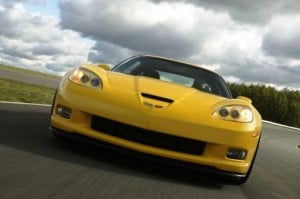 Better to be in front than behind, if the Corvette has a removable roof panel.

Chevrolet is recalling more than 22,000 Corvettes from model years 2005-2007 for defective roof panels. It seems that the glue used to bond the panel to the frame fails.

In a complete failure, the panel may fly off at speed, crating a hazard for following vehicles or anything in its path.

If there is a partial separation, the driver may notice one or more symptoms, such as a snapping noise when driving over bumps, wind noise, poor roof panel fit, roof panel movement/bounce when a door or hatch is closed, or a water leak in the headliner.

The problem goes back to march of 2009, and was initially attributed by GM to an improper repair procedure by a dealer in Japan. Subsequent investigation revealed that the problem was more widespread after repairs at many dealers.

Dealers will install a new roof panel free of charge. The safety recall is expected to begin during January 2010.