Cadillac Advertising: It Was Time For A Change

Please look for a shop with cajones!

Second only to the famous John Wannamaker truism of “Half my advertising doesn’t work, I just don’t know which half” is the wise advertising adage, “An agency is only as good as the client let’s them be.”

That is why last Friday, when the newest GM marketing news broke that Cadillac was agency shopping, I was not surprised. The association/relationship between the current agency and Cadillac was far from symbiotic.

So, for a change this was not bad news. Matter of fact it could be good news for Cadillac as current advertising efforts defined the words bad, boring and banal. Cadillac — once the most respected automobile brand for quality, integrity, dependability and vaunted aspiration — is floundering and lost in a very competitive world.

When I was a kid, owning a Caddy was the vehicular mark of success. So WTF happened? The name Cadillac epitomized positive words like quality, reliability and accomplishment. Was it the cars? Or was it the result of a good product well advertised? The brand’s advertising was equal to and often enhanced the design and engineering of its many vehicle models for more than 100 years.

In 2006, Leo Burnett, the final inheritor of the founding Cadillac agency in 1910, MacManus, John & Adams, lost the account to Modernista. Liz Vanzura, the former VW wunderkind (some said, L’Enfant Terrible) who had moved to GM and Hummer in 2003, was promoted to global marketing director of Cadillac, and she appointed the Boston-based shop. She was getting gushy media coverage including this from Business Week:

“The decisive act by Vanzura, who has rising influence and is now on her second brand, busts a company bureaucracy that has long relied more on the weight of its media budget than on compelling ad ideas to sell cars. ‘ TiVo and the remote control are killing us,’ says Vanzura. ‘We have to give consumers more reasons to listen to what we have to say.’”

Former Arnold Agency creatives’ who had worked for Ms. Vanzura at VW founded Modernista; when she moved to GM, she appointed them the agency for Hummer. Some of the early Hummer work was terrific, especially the television commercials, as I’d noted in my Automotive News review column at the time.

Most suits then at GM however have never and probably never will understand what constitutes good advertising — John DeLorean was probably the last guy who did. Here is an example from the above-mentioned Business Week article about Modernista and Hummer’s ads:

“A Hummer ad created by Modernista that ran on the Super Bowl and the Academy Awards — and scored well with consumers and ad critics — depicts a giant robot and Godzilla-like monster falling in love and procreating the new Hummer H3 (the baby Hummer). Vanzura says one GM executive seriously questioned whether it would be better, in the name of moral rectitude, to have the mommy monster wear a wedding ring. Vanzura also stood up to objections from GM product boss Robert A. Lutz, who criticized an ad for the Hummer H2 in 2004 that showed a boy in a wooden soapbox-derby H2 instead of the real SUV. The ad won multiple awards, and Lutz later admitted he had been wrong.”

Anticipating good things three years ago, I attended the media event at which the new Cadillac advertising was introduced by Modernista and Cadillac executives in a loft space in Royal Oak. I was underwhelmed. My review was tepid at best – it was headlined, “New Cadillac Advertising – Say So long to Breakthrough, Led Zeppelin Music and Gary Sinise Voiceovers. Say hello to “life, liberty, and the pursuit.” A theme still used.

The marketing rationale based on deep research was an interesting concept, but in fact, the execution was ho-hum boring. Aging baby boomers had essentially gone to luxury brands from Germany and Japan, not American machines. To get to the Gen Y group who was getting older and hopefully had the money to spend, they’d modernized the famous logo, removing the once important ducks, blew-up the Cadillac script to billboard size, added rather ordinary copy, but in fairness used good photography. Hackneyed was a word I should have used in my description but didn’t.

Now as Cadillac goes through the arduous process of agency selection – even as the old stuff continues to run – I thought it would be interesting to revisit Cadillac’s advertising history through some ad from more halcyon times. 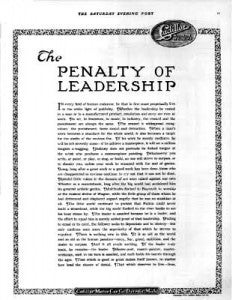 Cadillac did some advertising in the early 1900’s, but in 1915 one of the most famous of all auto ads appeared under the headline, The Penalty of Leadership.

It was written by Theodore McManus, an early copywriter, and one of the names in the agency. The ad was a response to negative feelings about the V8 engine, but not once was the name Cadillac used in the ad. The copy reads:

The Penalty of Leadership

In every field of human endeavor, he that is first must perpetually live in the white light of publicity. Whether the leadership be vested in a man or in a manufactured product, emulation and envy are ever at work. In art, in literature, in music, in industry, the reward and the punishment are always the same.

The reward is widespread recognition; the punishment, fierce denial and detraction.

When a man’s work becomes a standard for the whole world, it also becomes a target for the shafts of the envious few. If his work be mediocre, he will be left severely alone – if he achieves a masterpiece, it will set a million tongues a -wagging. Jealousy does not protrude its forked tongue at the artist who produces a commonplace painting. Whatsoever you write, or paint, or play, or sing, or build, no one will strive to surpass or to slander you unless your work be stamped with the seal of genius.

Long, long after a great work or a good work has been done, those who are disappointed or envious, continue to cry out that it cannot be done. Spiteful little voices in the domain of art were raised against our own Whistler as a mountback, long after the big would had acclaimed him its greatest artistic genius. Multitudes flocked to Bayreuth to worship at the musical shrine of Wagner, while the little group of those whom he had dethroned and displaced argued angrily that he was no musician at all. The little world continued to protest that Fulton could never build a steamboat, while the big world flocked to the river banks to see his boat steam by.

The leader is assailed because he is a leader, and the effort to equal him is merely added proof of that leadership. Failing to equal or to excel, the follower seeks to depreciate and to destroy – but only confirms once more the superiority of that which he strives to supplant. There is nothing new in this. It is as old as the world and as old as human passions – envy, fear, greed, ambition, and the desire to surpass. And it all avails nothing. If the leader truly leads, he remains – the leader. Master-poet, master-painter, master-workman, each in his turn is assailed, and each holds his laurels through the ages. That which is good or great makes itself known, no matter how loud the clamor of denial. That which deserves to live — lives.

Given the time span, this ad is still relevant. Most Cadillac ads in those days were simple black and white ads with illustrated artwork.

Depression Years to end of WWII 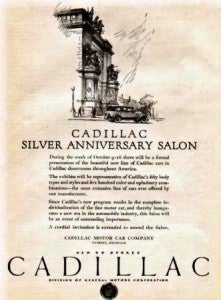 During the war years Cadillac ran institutional ads devoted to patriotic themes as the maker of engines for tanks and airplanes including the P38, one of the most beautiful aircraft ever produced.

For those of a certain age, these Cadillac advertisements in magazines were some of the most intriguing, beautiful auto ads ever created. Called the gem or jewel series, each used very expensive jewelry in the shape of the Cadillac “V” symbol framing the brand’s crest along with illustrations of a specific vehicle. Copy, while short, was focused on luxury, style and exclusiveness. Good sell words at that time.

Perceived quality then become part of the Cadillac selling proposition in magazines, replacing the luxury focus. Cadillac entered the world of television advertising — it had been a holdout — when it became the exclusive sponsor of first commercial broadcasts of the prestigious Masters Golf tournament in 1969.

I was working at MJ&A then and knew the brand’s first commercial, :60-seconds (no :30-second spots till the early ‘70’s) was to have featured music by Michel Legrand, the famous multi-talented French composer and Academy Award winner, but the then agency’s president did not like the music and used American composer Henry Mancini instead. Caddy was the sponsor of the Masters until the recent business disasters when it was replaced by Mercedes-Benz.

Style and fashion became a focus with the Seville in the 1970’s, including many events in dealer showrooms and country clubs. Sports also became important as professional golfers became endorsements for the brand. Click here.

There were a few strategic errors in the creative approach, though. The Cimarron’s – the first little car from Cadillac — commercial changed the way ducks on the crest were facing as a selling theme. Dumb. It did became a target of much derision. And a Super Bowl ad bombed as the female model outfit was deemed too scanty. Moreover, of course there is the Allante’, a two person – at $55,000 expensive for then – roadster. It was designed by Pinanfarina and the body was air freighted into Detroit. Allante’ had ads lacking in any degree of motoring excellence, style or speed. Click here.

From the mid-90’s forward, Cadillac’s advertising vacillated with differing focus, themes, media and formats:  it was vapid until DMB&B, the next to last ad agency, reinvigorated ads with the ‘breakthrough’ theme and the music of Led Zeppelin. At least it was memorable, but the cars were not.

But somewhat surprisingly, the last campaign from Modernista reverted to boring and banal until the axe fell last Friday. As I said — good client, good agency. There were some good-looking commercials along the way, including the recent simulated rocket launch, but it was way too little and much too late to be effective or memorable.

I hope the marketing powers who will make the selection of the new agency realize this one prestigious, aspirational brand needs a new approach to marketing, advertising and promotion to regain market share in a very crowded category, with clearly established leaders.

Please look for a shop with cajones!

Cadillac needs an agency with integrity and point of view, one that will not roll over to pressure from those who do not understand marketing – that’s what their wives do on Saturday’s – as well as national product and big retail experience, augmented with a heavy dose of web savvy and social media to meet the challenges of the new automotive marketplace.

Nothing is the same.

Cadillac’s new models deserve it! Without it, Cadillac goes from comatose to Code Blue life support.

2 responses to “Cadillac Advertising: It Was Time For A Change”