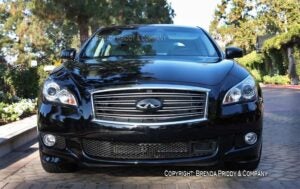 Infiniti may have “revealed” the new M in 3D virtual reality earlier this year, but never mind that, we have the REAL thing!

On my morning run today, I unexpectedly stumbled upon two pre-production testers. No clay models here – these were as real as it gets. Sporting cues from the Essence Concept, nothing is left to the imagination with this test car, as only a few poorly placed pieces of tape cover the badges.

Technology-wise, the new M will have a blind spot monitoring system and an advanced climate control system, among the additional line-up of features.

More pictures can be found at www.LeftLaneNews.com.