Feel the hurricane blow through your hair. 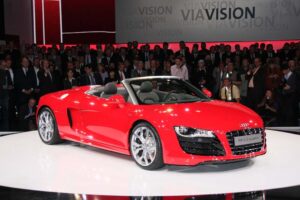 There’s something special about feeling the wind blow through your hair, but the feeling will likely be more like a hurricane should you stomp on the throttle of the 2010 Audi R8 5.2 Spider.

The long-awaited convertible version of Audi’s hot-selling sports car makes its formal debut, Tuesday morning, at the 2009 Frankfurt Motor Show, but the German maker provided a sneak peek during a background briefing for more than 2000 of the brand’s closest friends – TheDetroitBureau.com among them.

The cloth top can be operated even while driving, at low speeds, as Audi CEO Rupert Stadler demonstrated while driving the Spider onto the stage.  With the top down, the cabriolet retains the basic lines of the popular R8 sports car – and pretty much all of its performance. 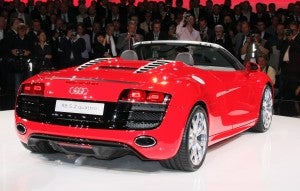 The visual changes are surprisingly modest, with the 2010 Audi R8 5.2 Spider, most notably with the speedster-style rear humps which feature modified air intakes.

The rest of the car is pretty much in line with the new Audi R8 V10, down to the lightweight aluminum spaceframe and the carbon fiber that surrounds the rear-mounted engine.  The front headlights feature 24 LED bulbs, honoring the grueling 24 Hours of Le Mans endurance race, where Audi has dominated for much of the last decade.

Besides the power-operated convertible top, the most distinctive design difference is the twin speedster humps, which also provide rollover protection.  And they incorporate slightly redesigned air intakes.