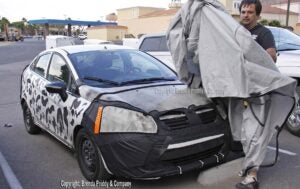 A first good look at the U.S. version of the new subcompact, the 2011 Ford Fiesta.

Ford has recently launched its  new Fiesta Sedan in China, but we caught the U.S. spec version – and – for the first time – a good look at the unique (North American-spec) grille and front fascia. It also appears that the Fiesta sedan will have different front and rear bumpers from those seen on the cars it has shown elsewhere, as well as minor interior changes.

The Fiesta will finally put Ford back into the subcompact market, which company officials have said is a critical step in their switch from a heavy emphasis on light trucks to a more fuel-efficient passenger car model mix.

More pictures can be found at www.LeftLaneNews.com