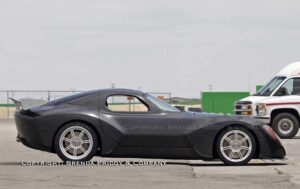 This is the first true spy shot of the Devon GTX, the planned American supercar.

Sometimes hiding in plain sight is the best way to get spy photos, and that’s exactly how we managed to photograph this Devon GTX undergoing aerodynamics testing. Patience and persistence also play a big role: besides the obvious, we waited until the Devon GTX was packed up and the hauler was heading out-of-town before we offered these revealing images.

This is the VERY FIRST time that the Devon GTX has been seen, driven on a track and photographed!! Any and all previous “photographs” were actually computer-generated imagery (CGI) and no concepts have ever put on display, but our photos are the real thing and prove that the production Devon will be true to the concept rendering!

In addition, this is the first evidence that Devon is using up-and-forward doors and that it sports a glass roof and carbon-fiber body. Other observations include a full belly pan and – although we were unable to discover exactly what’s powering the Devon GTX, we did overhear the engineers bragging about the 650-horsepower.

This test date must have been an important one, as we spotted company, Scott Devon, company founder, and British LeMans champion Justin Bell driving the soon-to-be American-built supercar.

Although the interior still looks mule-like, the exterior looks like all it needs is a fresh coat of paint  – as the carbon-fiber prototype was painted matt black. We’re guessing the look of the huge wing may change slightly before the GTX goes on sale in 2010, but the “supercar” looks like it’s all ready to go. Initial sales will like be in the States, but we’re guessing sales will eventually extend to Europe and elsewhere.

Unfortunately we don’t know what’s under the hood, but we can tell you that we’ve never heard an exhaust note quite like the one coming from the Devon and we don’t have any doubts that it’s capable of owning up to 650-horsepower when it debuts at the Pebble Beach Concours in mid-August.