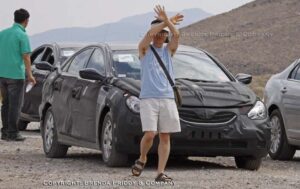 Late to the party, the Korean carmaker intends to finally get into the gasoline-electric market with the launch of the 2012 Hyundai Sonata Hybrid, captured here by our spy photographers.

The Sonata, codenamed “YF,” was penned at Hyundai’s design studio in Irvine, CA. We were told there was heated debate in the boardroom over the styling direction of the new Sonata. The final design sports a much sleeker, coupe-like roofline.

We’re hearing that the hybrid model of the Sonata, shown here, will use lithium polymer batteries instead of the often discussed lithium-ion. The polymer batteries are said to be more durable and cheaper to make. Besides obvious clues (our quick sneak-peek under the hood and small exhaust pipe) – this test group consisted of Hyundai’s well-known hybrid battery specialists, and the Sonatas were tested alongside a variety of competitive hybrids.

While the regular Sonata should start production for the U.S in the summer of 2010, the hybrid model should follow sometime in 2011 – likely as a 2012 model.

More pictures can be found at www.LeftLaneNews.com