First look at the stump-puller of an engine hiding under the hood of "test mule." 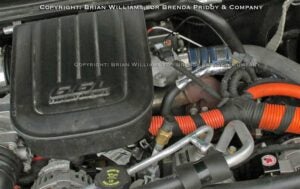 Diesels may be in the dumps when it comes to light-duty pickup trucks but things are starting to get hot in the heavy-duty segment.  New federal emissions rules set to take effect in 2010 have sent Ford and General Motors back to the drawing boards (the current Dodge Ram HD and its 6.7-liter Cummins I6 already meets 2010 emissions).

General Motors uses three letter identifiers to designate each new iteration of Duramax. The current 2007-10 ‘LMM’ Duramax is designed to run on ultra-low sulfur diesel fuel and work with a diesel particulate filter to cut soot emissions by 90 percent from 2006 levels. The LMM replacement is said to be called the ‘LML’ Duramax.

The LML Duramax is expected to be GM’s cleanest diesel engine yet. Some have speculated that its displacement would grow to 6.9-liters for emissions reasons but our sources say it will continue to be a 6.6-liter V-8.

In addition to trapping almost all particulates, the LML will have to cut nitrogen oxide levels by at least 90 percent from today using urea selective catalytic reduction.

NOx is a major air pollutant that contributes to smog, asthma, and respiratory and heart diseases. It’s a byproduct of diesel’s high combustion temperatures, which results from the high frictional heat levels created by compressing air in the cylinders to the point where it can ignite diesel fuel without using a spark.

The use of urea — which is being sold under the more marketable name “diesel exhaust fluid” — will require periodic DEF refills during refueling or regularly scheduled maintenance.

But the LML won’t use urea alone to lower NOx. Our sources say the LML will also add a second exhaust gas recirculation cooler to the engine, similar to the dual-EGR cooler setup the 6.4-liter Power Stroke Diesel uses.

EGR recirculates a portion of the engine’s exhaust back into the engine at a lower temperature. The cooled gases have a higher heat capacity and contain less oxygen than air, lowering combustion temperatures and reducing the formation of NOx.

Like the LMM, the LML Duramax is expected to stay with a single variable vane turbo but the wastegate plumbing for its exhaust appears to have changed considerably compared to the older engine. This is likely for emissions reasons.

When the original 2001-04 LB7 6.6-liter Duramax V-8 debuted, it helped pioneer the use of solenoid-controlled common-rail fuel injection in HD pickups. The LML is said to be upgraded to state-of-the-art piezo-electric injectors, which can react faster to fuel demands than solenoids.

One of the major innovations of GM’s now-shelved 4.5-liter V-8 ‘baby’ Duramax was the use of compacted graphite iron in the engine block to keep weight down and increase strength. For now, the LML is expected to stick with a conventional, heavier gray iron block.

The same aluminum heads used in the LMM and LBZ Duramax engine are said to continue unchanged, though the pistons are expected to feature a new oil-flow design to improve temperature control.

Almost a year ago, in the first spy photos of 2011 Chevy Silverado and GMC Sierra Heavy Duty mules, we noted the inlet in the middle of the front bumper that feeds air to the truck’s transmission oil cooler is about a third larger than the current inlet. We wondered what changes GM might be planning for the Silverado’s Allison transmission and EGR system. Our sources say the LML will continue to use a six-speed automatic. Some work had been done experimenting with an eight-speed automatic for improved fuel economy and towing performance but it’s said it was determined to be too costly. The large inlet is likely due to increased use of EGR and what’s said to be major changes to the Allison gearbox’s torque converter.

We expect power ratings for the LML Duramax to be approximately 700 pounds-feet of torque and 390 horsepower.

Additional pictures can be found at:  LeftLaneNews.com.