Will the call to action gain traction - or backfire by sending import-oriented liberals to GM showrooms? 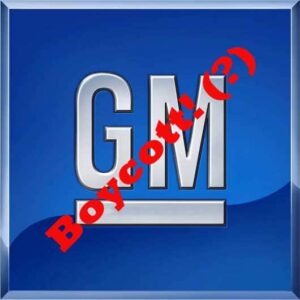 We live, it’s often pointed out, in a polarized society, and few things, of late, have been more divisive than the debate over the federal bailout of General Motors and Chrysler.

When first proposed, late last year, surveys found a solid majority of Americans opposed to using billions of taxpayer dollars to prop up the two financially floundering manufacturers.  And though that position is beginning to soften, there are still “certain parts of the country that do not like the concept,” concedes GM Chief Financial Officer Ray Young.

In fact, among the hardcore right wing, that opposition appears to be increasing, for any number of reasons, not all of which is specifically due to the issues of saving the automakers.  Nonetheless, the bailout is triggering a backlash that has some arch-conservatives calling for an all-out boycott of the makers, and especially of “Government Motors,” as critics call it, which will emerge from bankruptcy with the Treasury Department holding more than 60% of the “new” GM’s stock.

Among those who have given voice to the idea of a boycott is the conservative host Hugh Hewitt, who made the bailout a pet peeve on his nationally-syndicated talk radio show, as well as in the blog he posts on the website, Townhall.com.

“In the two days since the nationalization of GM was announced, the callers and e-mailers to my program have been 10 to 1 against the Obamaization of the American car business,” contended a June 3rd  posting, by Hewitt, who added that, “This is a decision that must be reversed. GM must be denationalized.”

“Individual Americans have a role to play,” argued Hewitt, echoing on-air comments. “They have to say no to GM products and services until such time as the denationalization occurs,” he wrote, concluding that, “every dollar spent with GM is a dollar spent against free enterprise.”

Hewitt is by no means alone.  The boycott theme is quickly spreading across the conservative talk radio world, as well as on websites like the one operated by the rightist Washington Times, where comments like this one from “HanoverMan,” suggested there were at least some potential buyers ready to listen.

“Once the UAW becomes part of the ownership group, I will never buy another GM again – ever,” wrote HanoverMan, in response to a poll by the paper asking readers whether they think the ailing automaker  “will ever regain its footing as a national icon?”  The results, by the way, showed 84% of respondents answering “no.”

Will the critics make a boycott stick, potentially strangling the new GM right from its inception, thereby hurting U.S. taxpayers, or is is this tale, as William Shakespeare wrote, “full of sound and fury, signifying nothing?

When asked if he fears the call for a boycott will cut into sales, GM’S CFO Young said, “I don’t think so,” adding that, “I believe the vast majority of Americans want us to succeed.  They want the hometown team to succeed.”

For his part, analyst Jim Hall, of 2953 Analytics, cautioned that, “You always worry when people are organized against you, but,” Hall stressed, “you’re talking about a small wing of a party that’s imploding.”

Indeed, there’ve been a number of efforts organized, over the years, against major corporations.  Only a few have had a measurable impact.  Others, such as the one built around claims that Proctor & Gamble’s logo signified devil worship, have made plenty of noise, but not much more than that.  At first, Ford Motor Co. appeared to buckle under when Rev. James Dobson, the controversial founder of Focus on the Family threatened a boycott because the automaker was advertising in various homosexual publications.  The company quickly reversed course and risked the wrath of ecumenicals when it renewed much of that advertising – but ultimately, the threat fizzled out.

And, added several observers, in today’s polarized environment, a call for a GM boycott by the right wing could actually win the automaker some sympathy in more liberal parts of the country – communities like San Francisco – which have typically had their own biases against domestic auto brands.