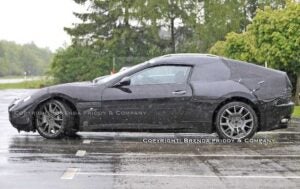 Lift the camouflage and you'd see the bones of Maserati's first-ever hardtop convertible.

In the words of our photographer:

Maserati’s most exciting car at present – the GT – will soon be given a beautiful sister, and she’ll be walking around topless at times: Spotted at the German Nürburgring earlier today was this prototype of a Maserati Spider.

Judging from the heavy camouflaged packed onto the car and in par with the brand-new Ferrari California, we reckon the Spider will be given a retractable metal roof rather than a conventional canvas top. Competitors like the Aston Martin DBS, on the other hand, will not follow this trend and will soon come with a traditional soft top. A Porsche 911 Cabrio, too, will never be built with anything but a canvas roof.

Different from the new GT Spider’s predecessor, the new model will apparently come as a 2+2- rather than a pure 2-seater. Engine and mechanics of the Maserati Spider won’t change compared to the coupe. We expect the cabriolet to debut at the 2009 Geneva Show.