Captured by TheDetroitBureau.com's spies, a week before its NY Auto Show debut. 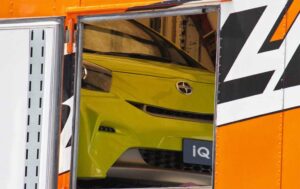 After a long stakeout (on a public street, of course) outside a top-secret Toyota facility, we caught a quick glimpse of Scion’s upcoming New York Auto Show Concept.  The” super-compact” hatchback, named IQ (same name as Toyota’s version), will debut as a Scion next week, and is expected to be sold here in the States.

The IQ, the first real competitor to the Smart, will likely be powered by a 1.5-liter engine, and will roll into dealerships in the $15,000-range.

Although our pictures were snapped through open doors of a car carrier and the lighting was extremely limited and filtered, we were still able to capture several details that weren’t supposed to be revealed until next week.

We find Scion’s version of the IQ more stylish and appealing than Toyota’s, with exaggerated fender flares, unique wheels and a new front fascia – as well as an interesting scoop-looking detail behind the front wheels.