Diesel on-hold, but Dodge has a hybrid truck on tap. 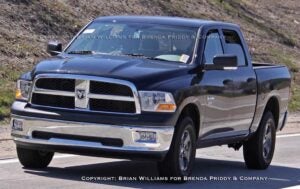 While the Dodge Ram Diesel is delayed, a Ram 1500 Hybrid is scheduled for 2010 - if Chrysler survives.

A diesel-powered Dodge Ram 1500 has been delayed, but the hybrid Hemi version is definitely happening for 2010. Our spy photographers caught it running undisguised in public during final testing.

GM is supplying Chrysler with the advanced two-mode transmissions that will be used. The electrically variable transmission houses two 60kW electric motors that can power the truck on their own up to about 25 mph, depending on driving conditions. As the multi-displacement 5.7-liter pushrod Hemi V-8 gas engine kicks in, the electric motors will seamlessly support it, individually or in tandem, at low and high speeds, helping the engine enter fuel-saving four-cylinder mode sooner and stay in it longer to achieve maximum gas mileage. Regenerative braking is used to capture energy that would normally be lost during braking or deceleration. The energy is stored in the batteries for later use.

The GM full-size hybrids can tow up to 6,100 pounds. The Ram is expected to tow about the same amount.