Lincoln will keep on trucking. 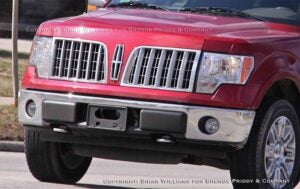 Lincoln's back in the pickup business in Mexico with this luxury truck, the new LT.

For U.S. truck buyers, this pickup is an unobtainable luxury, but our spies have just snapped photos of the all-new Lincoln Mark LT, which will continue to sell south of the border in Mexico.

The Lincoln Mark LT was discontinued in the U.S. after the 2008 model year due to slow sales. But this new Mark LT is based on the 2009 Ford F-150 Platinum edition and will be available to buyers in Mexico

The front end sports Lincoln’s distinct new double-waterfall grille design. It’s unlike any other snout in the F-150 lineup. In fact, it’s the seventh (!) unique grille we’ve seen on the current truck. The front rocker panels get Lincoln Mark LT lettering along with the tailgate, though on this test mule it still sports Platinum font across the back.

Reports have stated that the Mark LT will live on because the Lincoln brand has a very exclusive image in Mexico. Mexican buyers are prepared to pay more for a Lincoln-badged vehicle than they would for a similar one with a Ford blue oval.

The Mark LT was the second high-end hauler to not find success under Ford’s luxury brand in the U.S. The first was the unique Lincoln Blackwood pickup that never caught on with buyers and was dropped in 2002.