A sneak peak six months before its expected debut at the 2009 Frankfurt Motor Show. 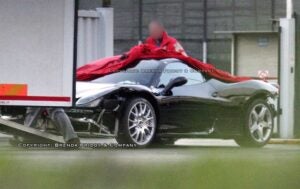 If you prefer not to peek, you could wait for the Frankfurt Motor Show, next September, to get your first look at the new Ferrari F450.

The first spy-photos of the real prototype of the forthcoming Ferrari F450 have emerged – and the car photographed doesn’t wear an inch of disguise! While some of the body pieces are missing on this prototype, a large portion of the production sheet metal is clearly visible!

The F450 is rumoured to have a higher power output than the 520-horsepower F430 Scuderia. Ferrari will use the same double-clutch gearbox from the California for the F450,  coupled with a 4.5-liter V8 engine. How the global Great Recession has affected the scarlet marque remains to be seen. There’s  speculation about the possible inclusion of advanced and expensive technologies, such as a road car version of electronic KERS (Kinetic Energy Recovery System, a sophisticated form of regenerative braking used in hybrids only here to boost performance) under development in the ultra-expensive world of Formula One racing that Ferrari has long dominated.

Ferrari has apparently code-named the car “F142,” and it is expected to make its first public showing at the Frankfurt Motor Show in September 2009. Deliveries would then commence just over a year from now. More pictures available at www.LeftLaneNews.com.  Photo Credit: Brenda Priddy & Co.