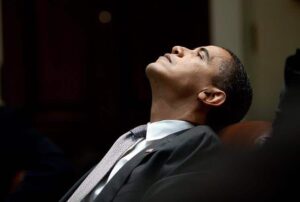 "We have seen problems papered-over and tough choices kicked down the road... Well, we have reached the end of that road."

In a speech heavily tinged with populist sentiments, President Barack Obama told General Motors Corporation and Chrysler LLC, Monday morning, that they will not be allowed to continue floundering along with the support of “an unending flow of taxpayer dollars.” At the same time, he sought to assuage nervous automotive buyers, and shore up hope among those who could soon lose their jobs or watch their communities founder as the result of the automotive industry’s crisis.

The president announced that GM will get an additional 60 days to pull together a much more aggressive restructuring program than it has so far submitted to the White House’s Automotive Task Force.

“The situation at Chrysler is more challenging,” added Obama, revealing plans to give the smaller maker just 30 days to complete a proposed partnership with the Italian automaker, Fiat, or some other potential alliance.

Failing to meet those deadlines, said the president, would almost certainly result in bankruptcy at the automakers.

President Obama’s comments, made at the White House, were clearly meant to balance the concerns of a wide array of constituencies. For critics of Washington’s increasing interventionism – especially in the form of supporting failing industrial companies – the speech made it clear that it can no longer be business as usual, in Detroit.

“Year after year, decade after decade, we have seen problems papered-over and tough choices kicked down the road, even as foreign competitors outpaced us,” Obama declared, adding that, “Well, we have reached the end of that road. And we, as a nation, cannot afford to shirk responsibility any longer. Now is the time to confront our problems head-on and do what’s necessary to solve them.”

At the same time, the president was acutely aware that the decision to leave the two automakers dangling could prove devastating to the many communities, across the United States that depend heavily upon the auto industry. Michigan, in particular, he noted, has an unemployment rate of more than 10%.

Referring to the “storm that has hit our auto towns,” the president said the nation will respond much as it does when a community is hit by a tornado or hurricane. He announced the appointment of Edward Montgomery, a former Deputy Labor Secretary, to serve as the new Director of Recovery for Auto Communities and Workers, “to cut through red tape and ensure that the full resources of our federal government are leveraged to assist the workers, communities, and regions that rely on our auto industry.”

But the president also made it clear that despite such an effort, “as essential as they are, will not make everything better overnight. There are jobs that cannot be saved. There are plants that will not reopen. And there is little I can say that can subdue the anger or ease the frustration of all whose livelihoods hang in the balance because of failures that weren’t theirs.”

The White House speech also aimed to address the concerns of American auto buyers, particularly those who might be considering domestic cars but are worried about the impact of a GM or Chrysler collapse. That’s more than an academic concern. Analysts blame at least part of the 53% decline in General Motors sales, in February, on concerns about long-term warranty coverage.

Under the new Warranty Commitment Program, the two makers will provide 15% of the estimated warranty costs of new vehicles into a special insurance fund. The Treasury Department will add 110% of the projected costs, which would allow coverage to continue, even if the companies were to go bankrupt.

“If you buy a car from Chrysler or General Motors, you will be able to get your car serviced and repaired, just like always,” asserted the president. “Your warranty will be safe. In fact, it will be safer than it’s ever been. Because starting today, the United States government will stand behind your warranty.”

The president also announced a series of steps that could prop up the floundering U.S. auto market, including a plan to accelerate the purchase of new vehicles for government fleets, as well as a new tax break that could save car buyers hundreds of dollars.

Meanwhile, the administration is prepared to push for a new “Cash-for-Clunkers” program, which the president noted has helped spur car sales in numerous European countries. The proposed program would offer cash incentives of as much as $5,000 to motorists trading in older vehicles. The tax credits would cover only vehicles built in North America, with the highest payout for those produced on U.S. assembly lines.

Not all those addressed in the speech were spoken to kindly. The president had particularly harsh words for the GM bondholders who have been refusing to accept compromises aimed at reducing the automaker’s crushing debt load. Obama warned them they “cannot hold out” expecting “endless” government assistance to cover their losses.

But the harshest words were aimed at GM and Chrysler management, who Obama said was largely responsible for the industry’s impending collapse. Indeed, on Sunday, the White House demanded and received the resignation of CEO Rick Wagoner, a 30-year GM veteran, who will be replaced by his former second-in-command, Fritz Henderson.

“We cannot continue to excuse poor decisions,” said Obama. “And we cannot make the survival of our auto industry dependent on an unending flow of tax dollars. These companies – and this industry – must ultimately stand on their own, not as wards of the state.”

Ultimately, though, the president made it clear that his goal is to find a way to help better-run automakers survive. “We cannot, we must not, and we will not let our auto industry simply vanish. This industry is, like no other, an emblem of the American spirit; a once and future symbol of America’s success. It is what helped build the middle class and sustained it throughout the 20th century.”

“I am absolutely committed,” the president concluded, “to working with Congress and the auto companies to meet one goal: the United States of America will lead the world in building the next generation of clean cars.”