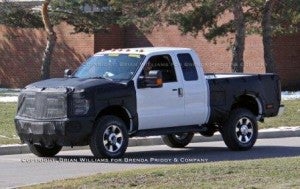 Just a week after Chrysler officially revealed its new 2010 Dodge Ram Heavy Duty pickups at the Chicago auto show, our spies have caught the first covered and camouflaged test trucks of its biggest competitor: Ford’s future F-250 Super Duty scheduled to arrive by 2011.

The 2011 Super Duty is expected to receive a major styling refresh, similar to the extent of the 2008 model year update. The current blue oval heavy-dutys took their exterior inspiration from the mighty Ford F-350 Tonka concept that debuted at the 2002 Detroit auto show. The practice round for the 2011 model appears to be the bold Ford F-250 Super Chief Concept, first shown at the 2006 Detroit auto show.

In the photos we can see two massive chrome bars stretched across the grille with a prominent Ford oval badge resting between them. There’s likely a third bar resting above the strong front bumper. The testers’ grille bars have more space between them than the tight tolerances of the Super Chief’s bars for real-world cooling and airflow needs. The current Super Duty’s hallmark side nostrils appear to have vanished, replaced by distinctive trim pieces on the sides of the grille that (at least for now) end abruptly at the top intake. Other styling updates are likely to be tail lights, which will probably be similar to those on the new 2009 Ford F-150.

Mechanically, we expect the 2011 Super Duty will carry over Ford’s 6.7-liter “Scorpion” V-8 diesel that’s expected to debut in the 2010 model year trucks. The gas engine is expected to be the new 6.2-liter premium V-8, which should replace the current 6.8-liter V-10 next year. Another major powertrain change is the likely end of manual transmissions, though the engineering mules in these pictures show Ford continuing its unique tradition of manual locking front hubs for four-wheel drive Super Dutys.

More images can be viewed at: