First look at the replacement for Merc's sexy, coupe-like sedan. 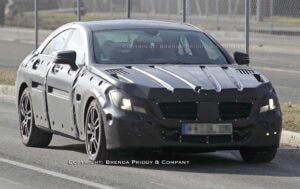 Despite the camouflage, it's clearly the '11 Mercedes CLS

Even with camouflage, these are the clearest shots yet of the second generation Mercedes CLS.

The CLS was the original 2+2 four-door “coupé” when it launched in 2004, with several and manufacturers following – including such automobiles as Aston Martin’s Rapide, Porsche’s Panamera, Volkswagen’s Passat CC and Audi’s upcoming A7.

Power for the new CLS is expected to come from a wide range of engines, including a BlueHybrid and, of course, and AMG with an expected 517-horsepower!

More views can be seen at www.LeftlaneNews.com