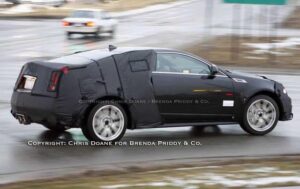 Last week GM shocked enthusiasts by announcing that the High Performance Vehicle Operations team was being disbanded. The HPVO crew, responsible for the V-series Cadillacs, Chevy Cobalt SS and HHR SS were said to be off working on regular cars now. These photos, shot in the last 24 hours, show the hipo team has one more trick up their sleeve.

The last time we saw a CTS Coupe V-series prototype was August 2008. It’s absence since then combined with GM’s Viability plan submitted to Congress had many thinking the hot rod coupe had been killed off. These new photos show the V-series coupe is alive and well!

Compared to the prototypes we saw 7 months ago, these new prototypes look almost production ready down to the wheels, exhaust tips and V-series badging. We can also see that this new prototype do not seem to be sporting cross-drilled rotors as the first prototypes were. Additionally, pieces of tape cover the V-series badges just behind the front wheels and on the brake calipers.

What hasn’t changed is the wire mesh grilles, power dome hood, wider tires, larger wheels, huge brake calipers and two massive, center-mount exhaust outlets. Under that power dome hood is the 6.2L, supercharged V8 motor known as the LSA. Good for 556hp and 551 ft lbs in the CTS-V sedan, we expect the Coupe V ratings to be very similar.

Expect the V-series to coupe to start production in the summer of 2010 at the same time the regular coupe starts rolling down the line at Lansing Grand River.