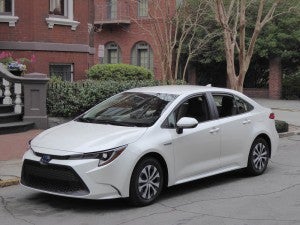 Toyota and Denso are establishing a joint venture to develop next-gen semiconductors for its EVs and hybrids. (Photo credit: Ron Sessions)

Toyota Motor Corp. and Denso Corp. are planning to establish a joint venture for research and advanced development of next-generation, in-vehicle semiconductors.

The two companies will study the details and aim to establish the new company in April 2020, the pair announced as Toyota continues to move forward with ventures that will enhance the company’s ability to deliver electric vehicles in the next several years.

“To create a future of mobility that is safe and sustainable, it is necessary to develop next-generation semiconductors that are integral to technology innovations, such as connected cars, automated driving, sharing mobility and electrification,” the announcement said.

The equity stake in the new joint-venture company offers Toyota the opportunity to promote innovations by introducing advanced semiconductor technologies from the planning phase while developing its mobility services and vehicles. 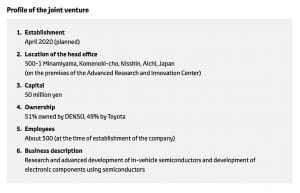 The new company will conduct advanced research on the basic structure and processing method of next-generation semiconductors and develop electronic components by implementing semiconductors, such as power modules for electric vehicles and periphery monitoring sensors for automated vehicles, thereby contributing to creating the future of mobility, Toyota and Denso said.

Last month, Toyota and Subaru Corp. disclosed that they had agreed combine in the development of a platform dedicated to battery electric vehicles (BEVs) for midsize and large passenger vehicles.

The objective of the Toyota-Subaru partnership is to develop a compact or C-segment-class BEV SUV model for sale under each company’s own brand.

By combining their respective strengths, such as the all-wheel-drive technologies that Subaru has cultivated over many years and the vehicle electrification technologies that Toyota is employing to bring together other companies that share its aspirations, the two companies intend to take up the challenge of creating attractive products with appeal that only BEVs can offer.

Both Subaru and Toyota noted they are required to conduct technological development with a sense of speed across a broader-than-ever spectrum of initiatives. Building on their collaborative ties the BEV agreement represented what was described as a new area of collaboration.

Toyota also announced that it has agreed to start consideration toward the transfer of Toyota-owned shares of Yutaka Seimitsu Kogyo Ltd. to JTEKT by January 2020. The goal of is to boost the competitiveness of Toyota and JTEKT’s main driveline operations.

Once the transfer is complete, all Yutaka Seimitsu operations, such as those related to drive components, namely components that relay motive power from the engine through the transmission to the wheels, gear manufacturing, and gear processing machinery, will be transferred from Toyota to JTEKT.

The growing shift toward vehicle electrification is expected to greatly change the market landscape. By enhancing the lineup of driveline products by making them more compact and lighter through the modulization of multiple components, is expected to increase the group’s ability to plan and propose driveline systems, Toyota said.