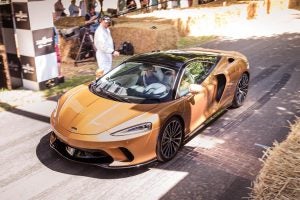 McLaren showed off its new GT model at the Goodwood Festival of Speed.

A McLaren for soccer moms? Perhaps a bit of an exaggeration, but the British super car company has been watching some of its competitors roll out sport-utility vehicles to enthusiastic buyers — and profits.

The company has responded with the new McLaren GT, a touring car that can be used like a daily driver. McLaren’s move toward a commuter car made its debut at the Goodwood Festival of Speed in the UK this week.

Initially revealed via the internet in May, the actual car crept around the festival and took a runs up the hill to let everyone get a good look at the new entry. While it is a Grand Tourer, it’s McLaren’s version of such a beast, which means the engine is right behind the driver and performance and handling are still, well, McLaren.

The McLaren GT is powered by a 620 horsepower 4.0-liter twin-turbo V8 engine. It sprints from 0 to 60 mph in in 3.2 seconds and has a top speed of 203 mph. If the roads are clear getting to work or your weekend trip destination shouldn’t take too long.

The McLaren GT also performs on the inside with luxurious trim options including Nappa leather, soft grain leather or Alcantara, and seats unique to the McLaren GT that are designed for long distance comfort. The luggage bay can also be trimmed with SuperFabric, developed to be resistant to stains, cuts, nicks and abrasions, as well as being breathable, easy to clean and quick to dry, the company notes.

The McLaren GT’s interior also features hidden-until-lit ambient lighting and the option of an electrochromic glazed panel to enhance ambience in the cabin, which is also trimmed with machined and knurled aluminum switches and controls.

The infotainment system developed for the new McLaren GT is the company’s most sophisticated to date, featuring industry-standard HERE navigation and real-time traffic information and it can also be linked to an optional 12-speaker Bowers & Wilkins premium audio system. The McLaren GT pricing starts at $204,000, or £163,000.

The GT is part of the company’s initiative to introduce 18 new vehicles by 2025 with a goal to raise production to 6,000 vehicles annually. The company plans to reduce costs by using the same carbon-fiber body and offering only two engines. The company’s vehicles will get different designs and technology to help separate them from their siblings.

(McLaren Fills in Holes in Longtail’s Story at Goodwood)

The carmaker is committed to a 100% hybrid line-up by 2025 and has started development of a full battery-electric. This marks a big jump for McLaren because supercars without a rumble face an uncertain future with the fans. In fact, Lamborghini said it won’t build one because its buyers have told them they’re not interested.