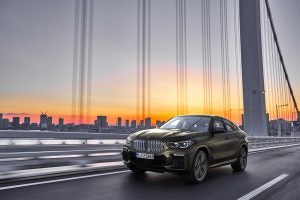 The new 2020 BMW X6 is likely to set a new benchmark for the luxury SUV segment.

Product proliferation is the name of the game, these days, and among the many models introduced over the last decade, few have had the impact of the BMW X6.

The original 2007 model wasn’t the first to attempt merge a sport coupe with a sport-ute – the Infiniti FX usually gets credit – but it was the Bavarian model that really clicked with the market and triggered an avalanche of me-too models from competitors like Mercedes-Benz, Audi and others.

That said, the X6 remains controversial for its distinctively sporty – critics would call it awkward – styling, that of a sports coupe on steroids. Those who like the look will almost certainly appreciate the update while those who don’t will continue to look askance.

Like other recent products, both conventional passenger cars and “Sport-Activity Vehicles,” the new X6 picks up on the larger version of the signature BMW double-kidney grille introduced with the new X7. One of the more distinctive features is the optional, illuminated version of the X6 grille which lights up along with the daytime running lights that surround the X6’s LED headlamps. 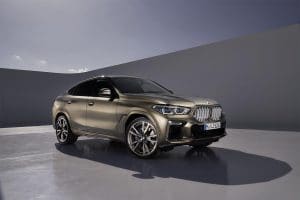 The BMW X6 set the standard for the “sport-activity vehicle.s

BMW designers clearly opted for a more aggressive appearance, for the 2020 remake, starting with the larger air intakes on the bumper, as well as the now-standard 20-inch alloy wheels and tires – which can be upgraded to 21 and even 22 inches. The double-bubble roofline flows into twin spoilers above the rear hatch glass. Key design elements, including those spoilers and the “air breathers” that reduce turbulence around the front wheels.

The tires aren’t the only things to grow larger. The third-generation X6 is 1.0 inches longer and 0.6 inches wider, while the wheelbase has been stretched 1.6 inches, improving the earlier model’s moderately cramped interior. The height of the 2020 model has been reduced by 0.7 inches, however, and we’ll have to wait to see how that impacts headroom, especially for those in the rear seat.

Like other recent models, the 2020 BMW X6 opts for a very drive-oriented interior layout. There’s a reconfigurable gauge cluster, a larger head-up display system that comes standard on top-end models, and the latest version of the BMW iDrive infotainment system. Audiophiles, meanwhile, will likely appreciate the Bowers & Wilkins Diamond Surround Sound System, which punches 1,500 watts through 20 separate speakers. For those who prefer to just watch the outside world passing by, the new X6 also offers a panoramic sunroof that’s 83% larger than the outgoing model. 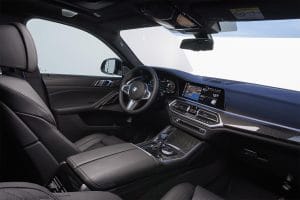 The interior of the X6 maintains BMW’s usual standard of comfort and opulence.

The optional Driving Assistance Professional Package adds features like Active Cruise Control with Stop & Go, which can operate at speeds up to 130 mph. It also includes “Lane Keeping Assistant with Active Side Collision Protection (which can) help the driver guide the vehicle back onto the correct path with an active turn of the steering wheel.”

There will be two inline-six versions of the 2020 X6, the rear-wheel-drive sDrive40i and the all-wheel-drive xDrive40i. They share the same 3.0-liter TwinPower Turbo making 335 horsepower, up 33 from the outgoing model. Torque is rated at 330 pound-feet, up 30 from the 2019 utility vehicle. The RWD version will hit 60 in 5.2 seconds, the xDrive package in 5.3.

All versions share an eight-speed automatic that is paired with the onboard navigation system and the active cruise control radar sensor. That lets the gearbox shift proactively, for example, downshifting ahead of corners and hills.

Top speed for all three X6 variants is 130 mph with all-season tires and 155 with optional performance tires.

BMW has yet to release final fuel economy numbers, as well as pricing. The current, 2019 X6 starts at $63,550 plus delivery fees.