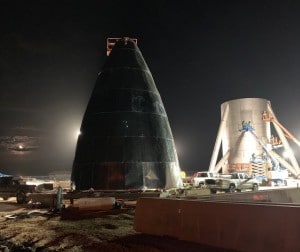 SpaceX is speeding up development of its Starship, which is designed take people and cargo to the moon and Mars.

For those looking to make the trip to Mars, they may start packing that suitcase sooner than they thought, at least if SpaceX CEO Elon Musk is to be believed.

Musk tweeted Sunday that as soon as Starship, SpaceX’s latest rocket in development, returns from its first orbit around Earth people can start reserving seats to Mars. He noted in a tweet the development of Starship is being accelerated to build the “Martian Technocracy.”

This prompted one follower to ask when folks can start buying tickets to Mars and Musk replied, “After Starship returns from orbit.”

SpaceX in the midst of the development of Starship, a multibillion-dollar, 180-foot-tall rocket that the company claims will one day take people to the moon and Mars, as well as launch satellites into orbit. It’s part of SpaceX’s fully reusable Big Falcon Rocket system, which includes a booster called “Super Heavy.”

(Tesla stock rebounds, but questions remain about production. Click Here for the story.)

Perhaps because he cannot help himself, Musk even offered a timeframe for Starship’s inaugural trip, saying there was a 60% chance of launching Starship into orbit by 2020. He added he wants to send a cargo mission to Mars by 2022 with actual people following in 2024.

Now, Musk is notoriously bad for meeting his own deadlines and has even mocked himself in earnings calls for how often he misses deadlines – self-imposed or otherwise. Right now, SpaceX is still testing concepts and engines in Texas.

Though the Starship project is still in development, the company’s Falcon Heavy rockets have shown to be very successful. The rockets can handle large payloads, ideal for launching satellites and small electric convertibles into space, with the side boosters then returning to Earth on landing pads so they can be reused. 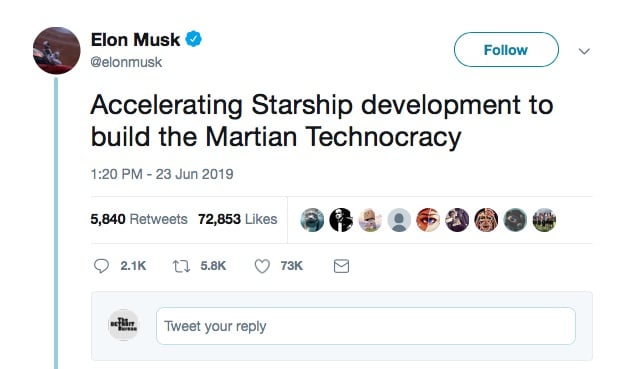 It can be argued he’s just as successful, if not more so, in the automotive industry where Tesla Inc. is the world’s largest electric vehicle maker. The company is tracking to surpass more than 350,000 electric vehicles built this year, with Moss hinting the number could be closer to 365,000.

Musks’ other recent ventures, such as SolarCity which was folded into Tesla, and the Boring Co. are still works in progress. However, the Boring Co. did manage to compete a section of tunnel in Los Angeles to show how vehicles would fit into the company’s ballyhooed plan to build a network of tunnels to relieve traffic snarls in and around L.A.