Steering control on utes may be affected. 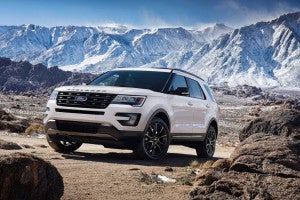 Ford is recalling 1.2 million Explorers for a problem that could reduce steering control.

Ford Motor Co. is recalling 1.2 million of its popular Explorer sport-utility vehicles due to a defect that could reduce the driver’s ability to steer the vehicle.

Ford said one customer reported hitting a curb when the toe link broke but it not aware of any reports of injury.

Affected vehicles were built at Chicago Assembly Plant, May 17, 2010 to Jan. 25, 2017. Dealers will remove and replace left and right-hand rear suspension toe links with a new forged toe link and align the rear suspension at no charge.

Ford said the $180 million cost, which will be incurred by its North America business unit, will be taken in the second quarter, according to Reuters. The company said it continued to expect adjusted earnings before interest and taxes to be higher than in 2018.

The action was part of a group of four, which also included the recall of 123,000 Ford F-150 pickups equipped with 5.0-liter and 6.2-liter gasoline engines that had the powertrain control module software reprogrammed as part of an earlier recall.

The powertrain control module software used to service these vehicles in accordance with initial recall was incomplete, lacking the updates necessary to prevent a potential unintended downshift into first gear or the updates necessary to ensure illumination of the malfunction indicator light in the event of an intermittent transmission output speed sensor signal. Ford is not aware of any reports of accident or injury related to this issue.

(Ford investing $500m in battery-truckmaker Rivian. Click Here to find out why.)

Ford also issued a recall for 4,300 selected 2009-16 Ford Econoline vehicles equipped with a 5R110W transmission, 5.4-liter engine, and a school bus or ambulance prep package, and 12,000 vehicles in the Canadian provinces of Alberta, Manitoba and Saskatchewan for select 2010-17 Ford Taurus, 2009-17 Ford Flex, 2009-15 Lincoln MKS and 2010-17 Lincoln MKT vehicles. Some vehicles operated in these Canadian provinces may experience a fractured rear suspension toe link. A fracture of a rear toe link significantly diminishes steering control, increasing the risk of a crash.