A small SUV with room for seven. 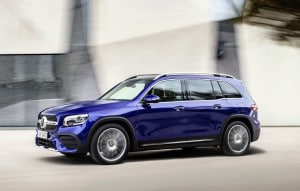 Mercedes-Benz had a gap in its utility line-up between the GLA and GLC. There isn't one anymore with the debut of the 2020 Mercedes-Benz GLB.

There’s a war out there among luxury automakers, the Germans, in particular, determined to fire a new model into every possible bit of “white space.” Nowhere is that more apparent than over in Stuttgart where Mercedes-Benz has rolled out an array of new offerings, including its first long-range all-electric model, the EQC, which was previewed at the New York International Auto Show a couple months back.

Now, Mercedes has pulled the wraps off yet another significant new offering: the even more downsized GLB, which was previewed at an event in Utah overnight. Slotted in-between the GLA and GLC models, the downsized crossover appears to have plenty going for it, including an array of tech features that should appeal to young buyers. But there’s another surprising plus. Despite its diminutive footprint, the GLB manages to offer seating for up to seven passengers.

It’s the first three-row offering from the Stuttgart-based automaker in this segment and, considering the market demand for seven-seaters, could gain a leg up on its two-row competition.

Granted, the back row is small, as Mercedes acknowledges, noting that it is designed for passengers of up to 1.68 meters in height. For the metric-challenged, that works out to about 5-foot-6, or perfect for kids up through the middle school and even high school years. And it will help keep them occupied by placing both cupholders and USB ports between those back seats. 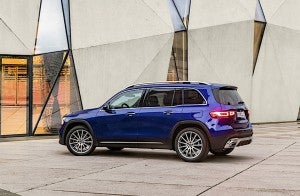 Mercedes newest ute, the GLB, fills the white space between the GLA and GLC.

(Mercedes-AMG unveils most powerful four cylinder ever. Click Here for the story.)

If you don’t need the optional third row, the GLB offers plenty of additional cargo space – and the ability to slide the second row back for more leg room.

The wheelbase of the GLB measures 111.38 inches, about five inches more than a GLA and 3.94 inches longer than the B-Class sedan. That added length allows the addition of the third row while still offering reasonable leg (and head) room for those in the front and middle rows.

The arrival of the GLB is no surprise. Mercedes signaled it some months back in concept form, though the production version doesn’t seem quite so rugged in terms of off-road functionality. That’s likely to matter little to the Gen-X and millennial family buyers who are its primary target.

That said, Mercedes will offer an off-road package and it comes as standard fare if you order the GLB with the 4Matic all-wheel-drive system. That includes useful features like hill-start and hill-descent control. The former ensures you don’t roll back when releasing the brake. The latter is essentially a cruise control system for off-roading, allowing you to set a fixed speed of up to 11 mph when descending or simply creeping along a trail. 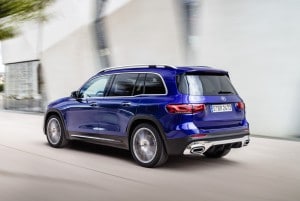 The new Mercedes GLB is powered by a twin-turbo four cylinder putting out 221 horsepower.

For the U.S. market, the new crossover will feature a 2.0-liter turbo-four making 221 horsepower and 258 pound-feet of torque. It’s reasonable to assume that the base model will be followed by one or more AMG variants over the next year or two, essentially the norm for the Schwabian automaker.

With the all-wheel-drive system, 80% of the engine’s torque normally goes up to the front wheels. That shifts to 70% in sport mode and a 50/50 split in off-road mode.

The 2020 Mercedes-Benz GLB features a pair of 7-inch screens, the left serving as a digital cockpit, the right side a touchscreen controlling a variety of different vehicle and infotainment functions. The new crossover is the latest in the Mercedes line-up, meanwhile, to introduce the new MBUX operating system which is effectively a mobile take on Amazon Alexa and Google Home. The system also features Apple CarPlay and Android Auto.

And, of course, there are the prerequisite Mercedes smart safety systems, including forward collision warning with active braking and crosswind assist. A number of popular features are in the optional category, at least on lower trim packages, however, including blind spot assist.

Pricing for the 2020 GLB 250 and GLB 250 4Matic will be released closer to their on-sale date later this year.