A serious new alternative for family buyers who want features, as well as more space. 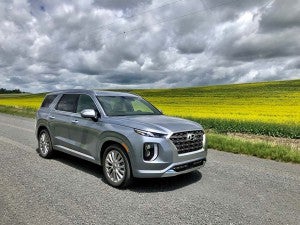 Hyundai's SUV portfolio is just about complete with the introduction of the new 2020 Palisade.

Late to the party, perhaps, but Hyundai is intent for making up for lost time when it comes to stretching out its utility vehicle line-up. Barely two years ago, it had just three offerings to choose. Now by the end of the year it will have a full seven, including two new bookend models, the pint-sized Venue, as well as the big Palisade.

We set off for Coeur d’Alene, Idaho, last week to check out that three-row offering, the first to offer a truly competitive alternative for family buyers. What about the older Santa Fe XL, you might ask. True, it also offered three rows, but the back bench was little more than a penalty box that even a tween would feel cramped in. With the 2020 Hyundai Palisade, the Korean carmaker set out to prove that bigger really is better.

Longer, wider, taller — a good formula for family buyers. But the new Palisade has a number of other attributes that should appeal to potential customers. It’s also quieter, more powerful, loaded up with more creature comforts and safety features, and boasts a far more upscale feel to it than any Hyundai product we’ve seen before, short of the old Genesis and Equus models that have been spun off as part of the new Genesis luxury brand.

Hyundai was a star of the U.S. automotive market during the first half of the decade, buyers enchanted by the distinctive styling, features and pricing of models like the Sonata and Elantra. The last few years have been tough, however, the Korean marque caught short by the rapid shift from sedans and coupes to SUVs and CUVs. Hyundai is racing to catch up with updates of traditional models like the Tucson and Santa Fe, as well as new offerings such as Kona and Nexo. This year will bring two more crossovers to the line-up, starting with Palisade. 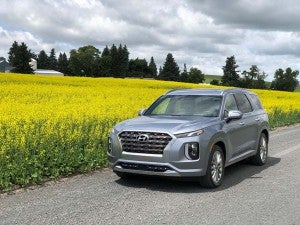 The Palisade gives Hyundai a true eight passenger SUV to round out its line-up.

Like the latest Sonata, the three-row CUV has been designed to be a visual stand-out in an increasing crowded, albeit often look-alike segment. Unlike some competitors, Hyundai decided not to simply clone the styling of its smaller offerings. “We’re not doing Russian dolls,” said U.S. design chief Chris Chapman – though the Palisade does pick up the vertical lighting first seen on the smaller Kona. Those lamps surround the biggest version yet of the brand’s cascade grille, with its chrome frame wrapping into the hood.

From the side, a hockey stick-shaped accent line falls from the forward wheel wells to parallel the rocker panels. Another chrome accent strip surrounds the front and rear doors before plunging down with the CUV’s C-pillar. The upright angle of the grille and the relatively squared-off roof are meant to give the new model “the feeling of safety and security,” Chapman suggested.

A subtle detail on the new Palisade is the move of the sideview mirrors from the windows to the door panels. The primary payoff is a noticeable reduction in wind noise. While we’ve not taken a sound gauge to all the various entries in the three-row SUV segment, first impressions suggest it’s among the quietest model available, including some in the luxury class. On top of that, Hyundai has introduced a useful – though not unique – feature, an intercom that lets those in the front row readily communicate with those in the back. First seen on the latest Honda Odyssey, it’s something parents will love. 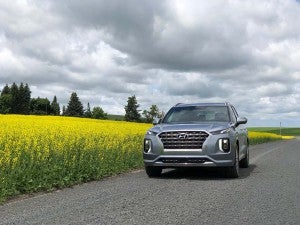 The new Palisade is powered by a 3.6-liter V6 mated to an eight-speed transmission that puts out 291 horsepower.

Before we could head out on a 200-plus mile tour of western Idaho, Hyundai took us out on Lake Coeur d’Alene for a briefing on all the details of the new Palisade. The tour boat’s captain had to double back several times because of all the time it took to outline the new ute’s features.

To start with, the Palisade measures 196.1 inches, nose-to-tail, a full three inches longer than the old Santa Fe XL. The wheelbase has been stretched four inches, to 114.2, while the new model is nearly four inches wider, at 77.8 inches, and over two inches taller, at 68.9. A number of steps were also taken to reinforce the body, something that proved to pay off in terms of ride quality, as well as noise.

Available in either a seven or eight-passenger configuration, the rear bench now can fit up to three adults with an acceptable level of comfort. Hyundai also came up with trick one-touch second-row seats – both bench and optional captain’s chairs, making it far easier to get into the back.

As you’d expect for a people-mover that – whatever Hyundai wants to call it – serves as the modern alternative to a minivan, the 2020 Palisade has plenty of family friendly features, including that rear intercom, lots of cupholders and USB connectors, a Qi wireless smartphone charger and a good infotainment system that can be upgraded to include the latest audiophile package from Harman Kardon. The high-end package incorporates 12 speakers, driven by a 630-watt multi-channel amp that proves uncanny in terms of adding depth to compressed audio sources.

There are three different digital instrument clusters, ranging in size from 3.5 to 12.3 inches, as well as the 12.3-inch infotainment touchscreen. That package can be divided into three individual “tiles” to allow multiple features, such as navigation and audio, to be displayed simultaneously. 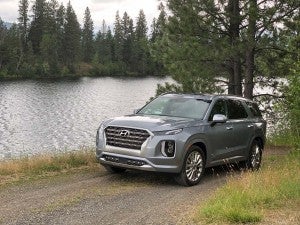 The Palisade isn't just a show pony. It can tow 5,000 pounds making it a go-anywhere beast.

There’s a lot of creative thinking that’s gone into the new Palisade, including the draft-free roof vents for middle and rear-seat passengers.

(Click Here for more about our first drive in the 2019 Hyundai Santa Fe Ultimate.)

And, as you’d expect, there are a variety of family-friendly standard safety features, such as forward collision warning with automatic emergency braking, as well as optional advanced driver assistance technology including blind spot detection and the new Highway Driving Assist, which can automatically adjust the vehicle’s speed when set to cruise where speed limits might change.

There are three trim levels to the 2020 Hyundai Palisade, and the upper model, the Limited, deiivers a level of luxury you wouldn’t likely expect from a mainstream market crossover, especially a Hyundai. That includes details such as the padded door panels with their hand-stitched coping. Cover over the “H” on the steering wheel and we’ll bet lots of folks would expect this to be positioned in the entry luxury category, along with products like the Volvo XC90.

The interior packages is one of the roomier in the segment, with 18 cubic feet of storage space behind the third row. Lower both the rear and second-row seats and that jumps to 86.4 cf. There are plenty of places to stow gear, including a woman’s handbag, starting with a massive center console bin. By opting for an electronic shifter, there’s even space below the floating center console. 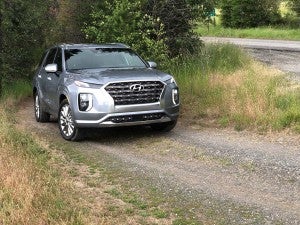 The Palisade comes at a time where it was do or die for the brand's portfolio of sport-utility vehicles.

All versions of the Palisade share a 3.8-liter V-6 that produces 291 horsepower and 262 pound-feet of torque. It’s paired with an eight-speed automatic that shifted seamlessly and rarely seemed to pick the wrong gear as we rolled across the hills and dales of Idaho farm country. The engine is peppy enough, incidentally, to handle up to a 5,000-pound trailer, and the Palisade can be ordered with both a Class III hitch, as well as a self-leveling rear suspension that won’t leave its nose pointing skyward when hauling a heavy load.

Acceleration can reasonably be described as sporty, as can the crossover’s handling and steering. There, in fact, is where we think that Hyundai has made some of its biggest improvements during the last several years. No longer do you have to cope with a steering system that lacks on-center feel and requires you to saw back and forth. Palisade goes where you point it. There’s good response to even subtle steering inputs. The CUV’s front MacPherson strut, rear multi-link suspension system is equally robust and, even when flogging down some tight canyon roads managed to retain its aplomb – though it doesn’t quite have the sporty feel of the Mazda CX-9.

What’s intriguing is how Hyundai was able to maintain some distinct differences, with Palisade, from the three-row Telluride offered by sibling Korean brand Kia. Palisade is both the sportier and more refined package. They obviously share the same basic underpinnings but don’t come across as badge-engineered clones. 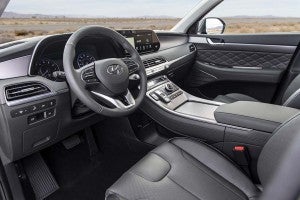 The Palisade offers a refined feel, not only in terms of road manners, but also in its interior trim components.

There are plenty of new offerings in the segment, several of them new for 2020, including the latest-generation Ford Explorer. On the whole, Palisade stands up well in this crowd. It helps that the automaker also has made some marked improvements in quality – Hyundai, on the whole, was ranked third in the latest J.D. Power Initial Quality Study released this month, behind only Genesis and Kia.

That said, despite being one of the most luxuriously equipped models the brand ever has offered, the 2020 Hyundai Palisade retains an advantage on the cost front. No, it’s not the bargain basement pricing of the automaker’s earlier years, but the “base” Palisade SE, at a starting price of $31,550, is less expensive than all key competitors but for the Volkswagen Atlas – and about $5,100 less than the new Explorer. That holds generally true up the trim ladder, including the $44,700 Palisade Limited.

(To see more about the Hyundai Venue, Click Here.)

There was a time, not all that long ago, when Hyundai was limited to a handful of generally small and poorly equipped models, and the only real selling point was a rock-bottom price tag. Perhaps no other model more clearly demonstrates what the “new” Hyundai is about like the 2020 Palisade. With the addition of this three-row crossover, we expect the Korean brand to bring in a lot of family buyers who barely noticed it before.