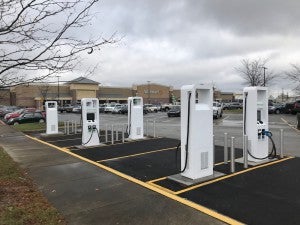 Electrify America is installed 120 charging stations at Walmarts across the country.

Seems like you can get just about everything at Walmart these days, and if you own an electric vehicle, you can even get your vehicle charged up while you’re there … well, at some of them anyway.

The world’s largest retailer is home to 120 new chargers from Volkswagen AG unit Electrify America in 34 states with plans, according to Reuters, to add 180 more by the end of the year. The move is part of Electrify America’s goal having 2,000 charging stations at 484 sites in 17 large metro areas.

Partnering with Walmart gives the company an easily identifiable place for EV owners to go to get their vehicles charged. There multiple benefits to the Walmart partnership as it allows users to shop at the store or head over to other locations, such as restaurants, that are often near a Walmart.

“What Walmart offers is the heartland of America,” Brendan Jones, Electrify America’s chief operating officer, told Reuters. “That is a massive benefit geographically for us.”

(Elonroad takes EV charging where it hasn’t gone before. Click Here for the story.) 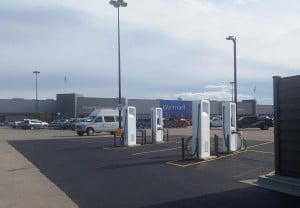 Electrify America plans to add another 180 chargers by the end of the year.

Electrify America was born to help Volkswagen make amends for the diesel emissions scandal in 2015. The company pledge $2 billion, including $800 million in California, over a 10-year period to establish the aforementioned network of 2,000 chargers.

While 300 chargers by the end of the year is impressive, it still lags the networks of EVgo and Charge Point as well as Tesla. It’s also not alone as General Motors and others are looking to get foothold in the burgeoning market. Its stations use 150 kW and 350kW fast chargers, which can infuse an EV with 20 miles of range per minute.

“We anticipate the use of EVs will continue to rise and we want to put in infrastructure to accommodate that,” Mark Vanderhelm, vice president for energy at Walmart, the world’s largest retailer, told Reuters.

Vanderhelm said he expects the number of Walmart store locations with charging stations to keep growing as shopping habits change. With the rise of online shopping, more delivery vehicles are expected to become electrified.

The aggressive expansion comes just a month after the company announced it was cutting prices for charging by 20%.

“Longer range and faster charging times are critical to the widespread adoption of electric vehicles,” said Brendan Jones, the chief operation officer at Electrify America, during a conversation at the company’s headquarters in the Washington, D.C. suburb of Reston, Virginia.

(To see more about Google Maps taking the guesswork out of finding charging stations, Click Here.)

Though housed in the same building as Volkswagen’s own U.S. headquarters, Electrify America, or EA, is required to function as an independent entity. It has been working with a wide array of competing manufacturers, such as BMW and General Motors, both of whose battery cars appeared in ads EA ran online and on network broadcasts last year promoting electric vehicles.