With Over 11M Vehicles Expected to Use V2X tech, FCC Delays Decision on Needed Radio Spectrum 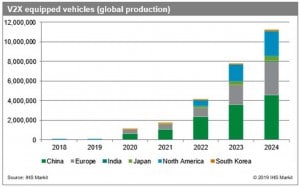 IHS Markit predicts the growth of V2X in the United States.

More than 11 million vehicles globally are expected to be equipped with connected-car technology, often known as V2X, by 2024, according to a new study by IHS Markit.

The technology is meant to allow vehicles to talk to one another, as well as an infrastructural network to share information like weather and traffic conditions and even when a stoplight is about to change. It can also alert a driver when another vehicle runs a red light, potentially saving lives.

But some proponents fear the rollout of V2X technology could be delayed, at the least, because of an ongoing debate over the precise method that these systems will use to communicate. The radio spectrum that had been set aside is being coveted by groups like Comcast and CBS which would like to use it for alternative purposes, such as expanded Internet and WiFi services.

“A major driving force for the implementation of enhanced connectivity in vehicles today is the demand for safer roads and the minimization of road fatalities,” IHS said in a summary of its new study. “While automatic crash notification systems are doing their part in this matrix, the introduction of V2X is expected to revolutionize the way consumers drive, if not the entire transportation system.”

Some early versions of V2X technologies are already rolling out. Audi, for example, now offers it in most models – including the new e-tron. After its Las Vegas test run, it’s capable to connecting to infrastructure networks in 17 metro areas, calling it V2I. It alerts drivers when lights are set to change. 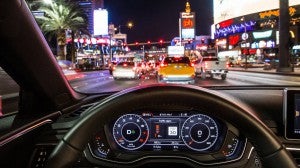 Audi's expanded its early trial for V2I technology from Las Vegas to include 16 more cities.

Meanwhile, Cadillac is using a vehicle-to-vehicle system, or V2V, with some of its sedans to test their ability to pass information around. This can include alerts about sudden weather changes, updates on rush-hour traffic or even a warning if someone runs a red light.

There are also regional experiments, roughly 100 square miles around the Ann Arbor, Michigan area installing V2X technologies that can communicate with a fleet of specially equipped test vehicles.

The U.S. is not alone in pushing for the development of the technology – which would eventually help make autonomous and fully driverless vehicles even smarter. China, the consulting firm notes, “is expected to lead the global V2X market,” and will have more than 600,000 vehicles using the technology in use by 2020. It is expected to stay in the lead through 2024, added IHS, though Europe is expected to gain significant momentum by then.

Japan and Korea are also moving fast. But the consulting firm cautions that it doesn’t really see the U.S. getting seriously into the game until 2021. 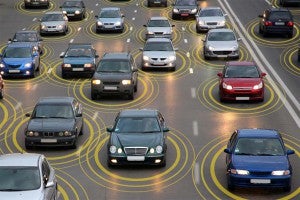 V2V technology is growing in the U.S., including systems implemented by Audi and Cadillac.

One of the things that could slow the U.S. adoption down, according to various observers, is the ongoing debate about how V2X technology will work. Most automakers had been supporting the idea of setting aside a portion of the radio spectrum just above where 5 gigahertz WiFi now operates. But with U.S. development of V2X lagging, a number of communications companies have been pressing the Federal Communications Commission to take it away from the auto industry and give it to them to service expanding demand for streaming consumer technologies.

Elaine Chao, Secretary of the U.S. Department of Transportation, in turn, asked the FCC to protect the spectrum – or at least delay any changes. On Wednesday, FCC Chairman Ajit Pai said he would scrub plans for a review that was set to begin in June considering alternatives for the spectrum that had been set aside for the auto industry in 1999.

On the other hand, some V2X proponents aren’t sure it would be a problem to lose that bandwidth. They contend that the technology might do just as well by working with the 5G cellphone network that is just beginning to roll out across the U.S.

(To see more about the fed’s plan to phase in V2V technology, Click Here.)

Anna Buetrner, a principal automotive analyst with IHS, appears to agree, stating that, “While regulatory bodies can greatly influence the fate and speed of deployment of V2X technologies, the momentum of V2X technology development will not be slowed down at the OEM and supplier level. This technology is here to stay.”