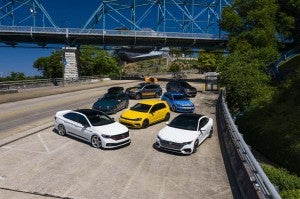 Volkswagen has long had a history of rolling out some of its most creative niche products and concept cars at the annual Worthersee gathering in Austria. It has expanded that tradition by adding what it calls the SOWO event on Hutchinson Island in Savannah, Georgia.

Short for “Southern Worthersee,” the big gathering aims to entice VW fans this time around with seven concept vehicles featuring what it calls “sport performance add-ons and visual enhancements.”

Considering the shift in global markets, and especially the U.S., from sedans, coupes and hatchbacks to SUVs, CUVs and other light trucks, it should surprise no one that this year’s crop of concepts includes versions of the latest Tiguan and Atlas crossover-utility vehicles. But Volkswagen traditionalists shouldn’t be disappointed, either, the automaker rolling out customized versions of the Golf, Jetta and new Arteon, as well.

Here’s a look at Volkswagen’s seven new SOWO concepts for 2019:

This concept was developed in a collaboration with Vossen Wheels, as is immediately apparent from the 21-inch forged wheels, and actually made its initial debut during the most recent SEMA Show. It features a distinctive coating lending a sort of satin finish to its paint. It’s also been lowered nearly three inches thanks to H&R Ultra Low coil overs. Since going to Las Vegas, however, VW has continued tinkering with the show car, adding a custom valence kit, big Forge Motorsport brakes and Aluminum floor mats.

First shown at the New York International Auto Show just last month, the Basecamp Concept is designed to demonstrate just how rugged and versatile Volkswagen’s big SUV can be. The target audience is the endurance mountain biking crowd and conceived by Alex Earle, an avid cyclist who just happens to work at VW design center in California, it starts out as an Atlas SEL Premium. But it undergoes an array of modifications, including its Platinum Gray and Black Uni matte finish complemented by orange accepts. The 17-inch fifteen52 Traverse MX Concept wheels are shod in all-terrain tires. Other updates include a custom body kit, a coil over kit that raises the SUV 1.5 inches, a roof rack with bike holders and front and rear LED offi-road light bars.

The show car highlights features from a number of Golf models from around the world. But it is, at heart, an Alltrack SEL, with a front bumber from a Golf GTE, a Golf GTD short shifter, and a rear spoiler from the Golf GTI Rabbit Edition. Not enough? Add adjustable lower springs, a base carrier bars, an integrated LED light bar and a big cargo box. Then finish it up with custom, ’90s-themed graphics and tinted windows.

Here, VW has partnered up with Fifteen52 to come up with a distinctive Super Touring Concept. It starts out as a 2019 Jetta GLI Autobahn, but add to that Fifteen52 wheels, K&W Variant 3 DDC coil overs, a sport spoiler, a brake kit, extended exhaust and tinted windows.

Among the seven SOWO models, this version of the Golf R actually can be ordered as part of the Spektrum program with, among other things, as many as 40 custom colors, a number of which are heritage offerings beloved by the brand’s enthgusiasts. The Spektrum Concept starts out as a regular Golf R model equipped with DCC and navigation but then gets finished in the Spektrum program’s Ginster Tellos paint. Its finished off with H&R VTF adjustable lowering springs, 20-inch Vossen forged wheels, tinted windows and black rocker panel accents.

The Super Touring Concept is the result of another collaboration between Volkswagen and Fifteen52. It started out a familiar 2019 Jetta GLI Autobahn that gets new Fifteen52 wheels, K&W Variant 3 DDC coil overs, as well as a sport spoiler, brake it, extended exhaust and tinted windows.

Another concept designed to showcase the versatility and capabilities of the latest updated small crossover, this concept was created in a collaboration with H&R Springs, and started out as a 2019 Tiguan SEL Premium 4Motion. The topographic-themed wrap underscores the “adenture theme. Here, H&R uss raising prings, with 18-inch Rotiform WGR wheels shod shod with all-terrain tires. There are an assortment of additional accessories from VW, as well as a a skid plate, rear spoiler, base carrier bars, aluminum steps and a white water kayak carrier.