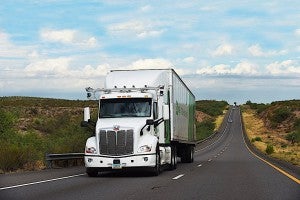 The United States Postal Service is partnering with TuSimple, using the company's autonomous trucks to haul mail across three states in a two-week trial.

Neither snow nor rain nor heat nor gloom of night stays these couriers from the swift completion of their appointed rounds — however, poor lane markers might be problematic for the United States Post Office’s latest “courier.”

The USPS entered into an agreement with TuSimple to use the San Diego-based company’s autonomous trucks on a two-week trial to deliver mail between postal centers in the southwest United States.

The self-driving trucks, which will have a safety driver behind the wheel and an engineer in the passenger seat, will haul mail between USPS facilities in Phoenix and Dallas. The program is designed to see if autonomous technology could improve delivery times and lower costs.

Cutting costs is a high priory for the Post Office as it’s billions in debt and can’t raise the price of a “Forever” stamp high enough to push its ledgers into the black any time soon.

(Daimler expects acquisition will speed up launch of self-driving trucks. Click Here for the story.)

The program involves five round trips, each totaling more than 2,100 miles, which is about 45 hours of driving. There are no firm plans for what happens after the two-week pilot ends. 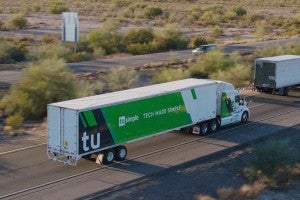 “The work with TuSimple is our first initiative in autonomous long-haul transportation,” USPS spokeswoman Kim Frum said. “We are conducting research and testing as part of our efforts to operate a future class of vehicles which will incorporate new technology.”

The autonomous trucks will travel primarily on interstates in Arizona, New Mexico and Texas. The trips aren’t unlike that of other autonomous semi trucks. Now-defunct Otto was the first to attempt this type of delivery run, hauling beer across Colorado a few years ago. Since then, several companies have moved a variety of freight on test runs.

“This run is really in the sweet spot of how we believe autonomous trucks will be used,” said TuSimple Chief Product Officer Chuck Price. “These long runs are beyond the range of a single human driver, which means today if they do this run they have to figure out how to cover it with multiple drivers in the vehicle.”

Long-haul routes with short turnaround times, such as this 22-hour trip, are well suited for self-driving trucks because they are normally accomplished using two drivers. Driving teams are challenging to recruit due to overnight driving requirements, the need to share close quarters with another person and a significant truck driver shortage, according to TuSimple.