Uber Stock Keeps Falling After Stumbling Out of Gate 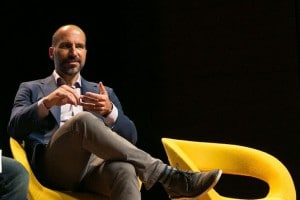 Uber CEO Dara Khosrowshahi asked employees in an email to hang in the as the stock price fluctuates.

Ride-hailing leader Uber saw its shares, which hit the market last week, continue to fall today into the $37 range after stumbling out of the gate.

Uber priced its initial public offering at the bottom end of the range at $45 per share after watching rival Lyft’s offering decline substantially after its debut earlier this year. The stock fell immediately when it debuted Friday, closing at $39.

“Pricing a deal is an art not a science,” said CEO Dara Khosrowshahi while interviewed on CNBC.

“So we will probably have had it imperfectly, but at this time it reflected the environment. At this time, the environment is uncertain right now and any time there is uncertainty at that end of the market, investors are going to be a little hesitant to put 8 billion of their dollars to work.”

(Lyft IPO depends on an autonomous future. Click Here for the story.)

However, the stock has continued to fall down into the low $37 range as investors continue to struggle to deal with negative factors that impact the company’s potential profitability. Khosrowshahi told Uber employees that the pricing could remain tough for some time.

“Sentiment does not change overnight, and I expect some tough public market times over the coming months,” he told staff in an email.

Investors seem to be grappling with three key issues when it comes to Uber, according to analysts, the U.S.-China trade negotiations, driver loyalty and, perhaps most importantly, the performance of rival Lyft.

The markets all seem to be nervous when it comes to the ongoing talks between the world’s economic superpowers. The recent turn has only caused more concern for investors and everyone is paying a bit of a price on their stocks because of it.

The strike by Uber and Lyft drivers right before the IPO certainly didn’t help, especially since most of the drivers work for both companies. The ability to swap back and forth as a customer is great, but it can be problematic when talking about drivers. The unwillingness of Uber drivers to remain committed to Uber, despite its leadership position in the market is frustrating for some investors.

Finally, and perhaps most importantly, is the $1 billion first quarter loss Uber’s primary competitor, Lyft, posted in the first quarter. For investors already concerned about the number of players in the ride-hailing market, seeing Lyft’s results wasn’t exactly inspiring. Lyft’s shares have taken a hit both on the financials as well as a sympathy dive due to Uber.

Analysts seems to agree that while the stock falling so far out of the gate is disappointing, an investment in Uber is a long-term deal. “In the long term, it’s the right platform,” said David Williams of Williams Capital Advisers. “It’s the No. 1 in the market. Lyft is a distant second. Right now, I’d rather be in uber than Lyft.”