CEO Mike Manley needs to prove he can maintain the pace set by his former boss, Sergio Marchionne.

Fiat Chrysler Automobiles reported profits dropped 41% in the first quarter as a slump in sales in key markets cut the company’s revenues by 5 percent.

The automaker attributed the decline to the normal production challenges related to an array of new product launches in North America, as well as pricing pressure in China and South America.

FCA CEO Mike Manley, however, reaffirmed the company’s guidance for the full year. “We expect earnings to grow in the following quarters,” he said as FCA completes the launch of the new Jeep Gladiator and the Ram Heavy Duty pickup truck.

The launches of both the midsize Gladiator and the heavy duty Ram weighed heavily on the company’s performance in a first quarter that saw net income drop to $501 million. Officially headquartered in The Netherlands, the automaker’s adjusted diluted earnings dipped to 40 cents, or 0.36 euros, down 42% from the first three months of 2018.

The launch of new products, like this Jeep Gladiator, took a toll during the first quarter.

FCA’s adjusted EBIT decreased 29%, primarily from lower volumes, though that was partially offset by positive net pricing in North America, Manley said. Global vehicle shipments were off by 14% for the quarter.

On the plus side, the automaker reported continuing growth in Ram volumes, though that brand also has some new models coming to market, in the form of its various heavy-duty trucks, which will impact production and revenues in the months to come.

“The market is responding enthusiastically to the roll-out of our new products and we continue to execute initiatives that will strengthen the underperforming parts of our business. Based on these factors and our first quarter results being in line with our expectations, we are confident in our 2019 guidance,” said Manley, who noted that FCA is now sitting on orders for 25,000 Jeep Gladiators.

(FCA pays its first-ever dividend. Click Here for the latest.)

At the same time, FCA is preparing to launch of electric vehicles, including an electric version of the Jeep Compass, to insure the company is in compliance with tightening environmental regulations. FCA’s new agreement with Waymo will also help protect the company’s earnings. The automaker is on tap to supply as many as 60,000 of its Chrysler Pacifica Hybrid minivans to the Google spin-offs Waymo One ride-sharing service.

Separately, FCA has also inked a deal with Tesla that will provide it credits to avoid penalties for missing European emissions targets.

In recent years, the Ram and Jeep brands have become the engines of FCA’s money machine. With Jeep in the midst of so many product changeovers, the automaker highlighted the roll of the Ram 1500 in the first quarter. In an unusual development, the pickup surged past the Chevrolet Silverado to claim a position as the number two full-size truck in the U.S. market. The Ram 1500 saw its share of the profitable market reach 23.3%, an increase of 4.5 percentage points over last year.

Manley added that FCA “took several steps to strengthen our business in the first quarter.” 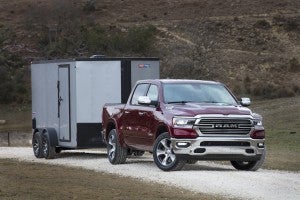 The Ram 1500 has been pulling a heavy load, propping up FCA's earnings.

These included the successful negotiation of a labor agreement in Italy and continued implementation of cost-containment actions in all regions. The Euro-American automaker also extended its partnership with Groupe PSA.

Since assuming the CEO role after the unexpected death of Sergio Marchionne last summer, Manley has had to not only move forward on FCA’s latest five-year plan but also push forward in two critical areas where the automaker has been lagging: the development of autonomous and electrified vehicles.

At the Geneva International Motor Show in February, the automaker revealed two Jeep plug-in hybrid models slated to go into production in early 2020. It is also working up battery-based systems for Alfa Romeo and the Fiat brand, the latter showing off its new battery-electric concept in Geneva.

Several significant moves have followed during the second quarter, including the announcement of a tie-up with Google and Samsung to develop an advanced version of the Uconnect infotainment system. It will help FCA move into the connected car space and could provide a foundation for using autonomous technology developed by Waymo.

The automaker has also completed the sales of its Magneti Marelli component unit, a move initiated by Marchionne before his death. The deal will generate cash proceeds of 5.8 billion euros, FCA said.

The earnings announcement comes a day after FCA announced its first-ever dividend.