A seamless blend of design, performance and functionality. 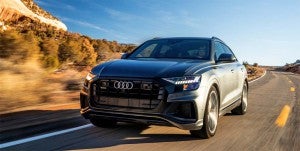 The 2019 Audi Q8 features a number of distinctive tweaks to the brand's familiar cues, including the signature singleframe grille.

Audi made its reputation building sleek, road-worthy sedans that have earned their way into the hearts of motorists around the world. The A8 is a great example of the sort of benchmark-setting model, one that has done well challenging competitors like the Mercedes-Benz S-Class and BMW 7-Series.

But that’s becoming a smaller and smaller segment of the premium luxury market as buyers around the world continue migrating from sedans and coupes to SUVs and CUVs. The good news for Audi is that, among its impressive stable of utility vehicles it has an alternative to the flagship A8. Like the sedan, the Q8 crossover is flush with all the industry’s latest and most advanced technology. And it also boasts the solid driving characteristics for which the German automaker has won over a legion of loyal fans.

We had a chance to spend a full week getting to know the 2019 Audi Q8 and while its base price of around $70,000 certainly would stretch the budget for most buyers, we found it an attractive, lavishly equipped and fun-to-drive alternative to the classic luxury sedan.

For starters, the 2019 Audi Q8 has an elegant exterior that distinguishes it from the brand’s previous crossover-utility vehicles with a somewhat more coupe-like look to its profile. It doesn’t have quite the aggressive roofline rake of a Range Rover Evoque, but the gentle slope flows into the more sharply angled back glass. 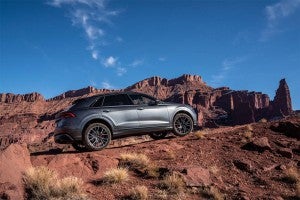 The nose is distinguished by one of the most dynamic applications of the familiar Audi singleframe grille, here framed by cats-eye-like LED headlamps and the brand’s familiar LED running lights. From the back, there’s a thin LED light strip running the full width of the tailgate.

Like other recent Audis, the Q8 has migrated away from the brand’s traditional, slab-sided profile, adopting a more sculpted look, with a series of character lines that flow from front to rear wheel wells.

(Audi tweaks its new subscription program. Click Here to find out what that might mean for you.)

As handsome as Audi’s classic exterior design has been, the brand’s design reputation has really been more focused on its interior, and the 2019 Q8 is no exception, though it also highlights some of the other changes that have been taking shape since Marc Lichte took over as global styling chief.

Lichte has a near-phobic aversion to knobs and dials, and his latest efforts take that to heart, adopting a twin-screen infotainment system that allows most vehicle controls to be operated by touchscreen. Not everyone will be pleased with the move away from the move away from Audi’s familiar MMI control system, but it is quite intuitive and easy to learn, unlike some competing systems.

Overall, the cabin is plush and elegant, all the more so with the $6,000 Luxury Package option. 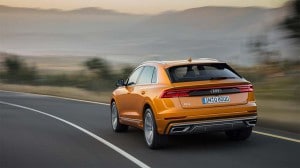 The slope of the roof is modest, the rake of the back glass aggresive, with taillights running corner-to-corner.

While Audi has a deft touch in integrating technology into its sedans and utility vehicles, it hasn’t lost sight of the basics, such as power, performance and stability on all sorts of surfaces thanks to the all-wheel-drive quattro system built into the Q8.

The basic numbers for the 2019 crossover are impressive. The 3.0-liter V-6, which is matched to an eight-speed transmission, delivers 335 horsepower and 369- foot pounds of torque. Our less than scientific road test suggests you’ll be hitting 60 from a dead stop in around six seconds, in line with key German competitors. It retains that solid sense of thrust as you enter onto a freeway or need to make a quick pass on a narrow road.

On the open road, the vehicle moves easily through its eight gears and never seems to miss a beat when the driving situation calls for a downshift.

Under normally driving situations, about 40% of the torque is sent to the front wheels, 60% to the rear. That can instantly jump to an 85% rear basis, where necessary. 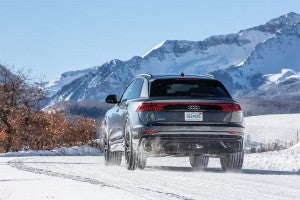 The 2019 Q8’s powertrain is equipped with mild-hybrid technology, a 48-volt system with its modest-sized battery stored under the rear cargo floor. These systems offer more limited benefits than the conventional hybrid technology we’re all familiar with from the likes of the Toyota Prius. The battery pack can store only a limited amount of energy, but it nonetheless helps smooth out the CUV’s stop/start system and offers a little torque boost at launch.

Overall, the 2019 Audi Q8’s driving dynamics are excellent, the CUV feeling well planted even on tight curves. The crossover is equipped with adaptive damping suspension that can be adjusted through Audi Drive Select to best adjust itself on varying driving situations and road conditions, such as snow, mud and ruts or, if you prefer, more sporty situations. Controlled electronically, the adaptive damping suspension makes for a comfortable ride regardless of road surface.

The Audi Q8 I drove also featured a lift/off-road mode that increases ground clearance. As you reach highway speeds, however, it automatically settles back down. 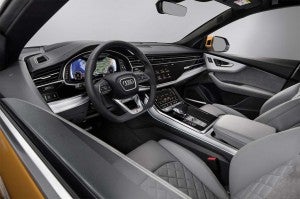 While it’s hard to match a sedan’s grace on tight corners, the Audi Q8 still manages to deliver a tighter, European-style feel than many similarly-sized CUVs.

The steering, braking are first rate. The steering is very responsive and offers the driver a chance to maneuver quickly around obstacles and other vehicles, whether coping with a packed freeway or an open road.

The Audi Q8 I drove also was equipped with a full-suite of advanced driver assistance technology such as a “hands-on” adaptive cruise control system that could maintain speed and following distance and handled everything from traffic jam situations up to speeds of around 95 mph.

Audi’s pre-sense system, which is standard, helps detect vehicles, pedestrians and cyclists in the vehicle’s forward path, at speeds of up to 52 mph and can initiate braking if a potential collision is detected. The Q8 adds a broad range of additional ADAS systems, such as blind-spot detection and lane keeping assist. 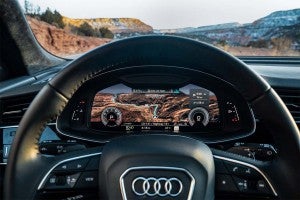 The all-digital gauge cluster can provide a detailed navi map to help you easily find your way.

That will get you features such as the optional to top view system which combines four wide-angle cameras on the outside of the vehicle to project a virtual real-time 3D model of the Q8, allowing the driver to toggle around the vehicle and zoom in and out to help with maneuvering in tight spaces.

There are a few features we’re surprised to see on the option list of a vehicle at this price point, such as the cross traffic alert system

(Audi earnings take a hit during first quarter. Click Here for the story.)

Audi has built a powerful reputation with a long string of impressively designed and engineered vehicles. While some might quibble with whether the 2019 Q8 is a true counterpoint to the A8 sedan, it comes as close as we’ve seen and goes well beyond the original Audi Q7 crossover. For those who want a highline CUV that blends design, performance and functionality into a single package, the Audi Q8 does it all but seamlessly.