But will the latest deal finally break start-up’s string of bad luck? 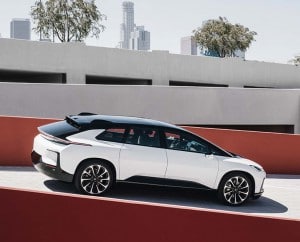 Faraday claims the latest funding should finally help it move its FF91 model into production.

It’s often said that cats have nine lives. Faraday Future must be the automotive equivalent of a feline considering the number of times the battery-car start-up has been bailed out.

Months after laying off the majority of its workforce and slashing pay for those remaining, the California-based carmaker has been tossed yet another lifesaver, this time in the form of a new, $225 million bridge loan from Birch Lake Fund Management LP. That comes barely a month after Chinese videogame company The9 Limited agreed to pump in $600 million in three tranches.

That’s enough, the company claims, to help it get its first product, the 1,050 horsepower FF91 ready for production while moving forward with the development of a more affordable model dubbed the FF81.

“FF is proud to call Birch Lake one of its strongest supporters and financial partners, and we thank them and our employees’ perseverance for helping us see FF 91 to reality,” said Faraday CEO Jia Yueting.

(Deal with mobile gaming company may save Faraday Future. Click Here for the story.)

Jia, often called the Steve Jobs of China, was the original big-bucks backer of Faraday, expected to pump in billions to bring the company to market. But the tech entrepreneur ran into major financial problems of his own a couple years ago, forcing him to pull back on financing not only FF, but also another EV start-up, LeEco. 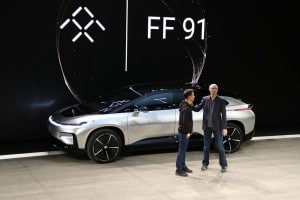 In better days: Jia Yueting and Nick Sampson, helped unveil the FF91 at the 2016 CES.

That set in motion a series of major setbacks for Faraday. For one thing, it had to pull out of a project partially funded by the State of Nevada that would have seen it set up its first factory just outside of Las Vegas.

Even after lining up another plant in Central California, however, things went from bad to worse, as alternative funding fell apart. Replacing Jia as lead investor, Chinese holding company Evergrande agreed to provide $2 billion in capital in return for a 45% stake in the battery-carmaker. It popped up with an initial payment of $800 million a year ago, but then backed out of the additional $1.2 billion it promised.

That forced Faraday to announce a series of job cuts that saw it ultimately lay off the majority of its workforce. Those who remained saw their pay sharply reduced.

It didn’t help that most of FF’s senior management, other than Jia, began walking out. Last November, Nick Sampson, one of the company’s founders, joined the exodus, issuing a statement declaring that, “The company is effectively insolvent in both its financial and personnel assets, it will at best … limp along for the foreseeable future.”

(Deal with SEC lets Tesla CEO Musk keep his job – but not everyone is pleased. Click Here for the story.)

Whether it is now limping along or actually showing some renewed momentum remains to be seen, but Faraday claims, in its latest release, that it is getting back on track. 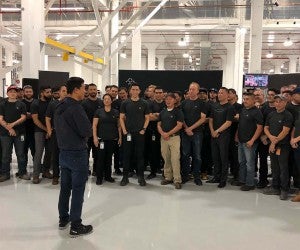 Faraday, the statement declares, “has created a multiple-stream bridge financing program to support the company pending completion of its announced equity-raising program.”

One of the most significant elements of the bridge loan is that it should help Faraday make peace with the numerous suppliers who claim they’ve been left holding the bag. Unless they come back onboard, according to several observers, there would be no way for Faraday to eventually get any product into production.

“Birch Lake has also provided financing to FF for the company to pay all past due amounts for approximately 60% of FF’s vendor base, including smaller vendors who are owed less than $20,000,” the automaker said. “FF’s larger suppliers and vendors have the opportunity to benefit in the vendor trust program by exchanging unsecured trade claims for trust interests that will hold a secured claim equal to all vendor claims in the trust and will include a repayment schedule to be completed during 2019.”

Whether Faraday can somehow land on its cat feet with the two new partnerships remains to be seen, of course. It has managed to see things fall apart time and again and there is no guarantee that the latest deals with Birch Lake and The9 will fare any better. Eventually, even cats can run out of lives.

(Boutique EV start-up Canoo plans to market its products only by subscription. Click Here for the story.)