“It was the most courageous thing I ever witnessed in sport.” 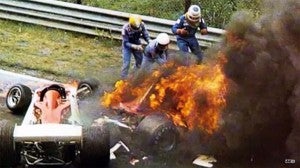 Few expected Niki Lauda to survive his crash at the Nurburgring on Aug. 1, 1976.

He was born to be a banker, like the rest of his patrician, Austrian family. So, when Niki Lauda asked his grandfather for the financial help he needed to land a ride on the Formula One circuit, he was cut off. Lauda eventually found a way to raise the money on his own, lining up a loan against his life insurance policy.

It was a risky bet, but Niki Lauda’s life was an ongoing gamble, whether on the track or in business, something that became all too apparent during a crucial race at Germany’s Nurburgring on August 1, 1976. Ironically, he had called for a boycott just a week before because of the lack of safety features on the winding course. But when the green flag dropped, Andreas Nikolaus Lauda was positioned at the front of the pack, despite a blinding downpour, determined to grab the lead against his F1 arch-rival James Hunt.

On the second lap, Lauda’s Ferrari spun out, hit an embankment and burst into flames. Trapped in the car, his borrowed helmet having slipped off, Lauda suffered massive burns that few thought he’d be able to survive. After slipping into a coma, a priest delivered last rites. Yet, somehow, Lauda pulled through, though the injuries were severe, the fire burning off most of his right ear and hair, as well as his eyelids, while searing his lungs.

“My then wife fainted when she first saw me,” Lauda told Britain’s Telegraph in 2013. “So I knew it could not have been good.” 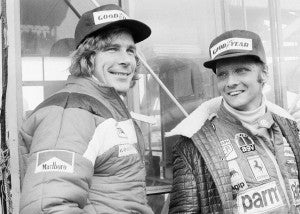 Niki Lauda (r), with arch-rival James Hunt. Their 1976 F1 title duel was captured in the film, Rush, though they were actually friends in real life.

Despite the devastating damage, Lauda was determined to continue the chase against Hunt. Defying his doctor’s orders, the Austrian left his hospital bed and, just six weeks after the Nurburgring crash, Lauda climbed back into the seat of a new Ferrari 312T2, having missed just three races.

“Niki had no right to be there because he was nowhere near healed,” said Sir Jackie Stewart, himself one of the most legendary drivers to compete on the Formula One circuit. “It was the most courageous thing I have ever witnessed in sport.”

For his own part, Lauda admitted feeling “terrified” as he climbed back into his Ferrari, but slowly he regained his confidence, realizing “the worst was behind me. I had crossed the threshold and was once more at my normal rate.”

The battle with Hunt continued through the remainder of the season, Lauda holding a slim, three-point lead over his rival going into the season’s final race in Japan. But the race was marred by another torrential storm and Lauda, struggling to see through his fire-damaged eyes, pulled over and parked his car, leaving Hunt the room to run by and clinch the F1 driver’s title by a single point. 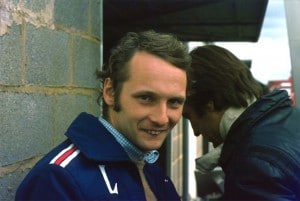 Lauda before the crash. He was often called "The Rat" because of his prominent overbite. Photo Courtesy: Gillfoto

Before he would eventually retire from racing, Lauda would capture three Formula One titles of his own, and become one of the most famous names in his sport. But the damage from that one crash would haunt him for the rest of his life. Beyond skin grafts, Lauda allowed himself only one reconstructive surgery meant to help fix his eyes. But there had been plenty of other damage. He eventually went through two kidney transplants and, in August 2018, he had a full lung transplant.

But Lauda never fully recovered and, on Monday, his family announced his death at the age of 70.

To the end, Niki Lauda retained his ties to motor sports After leaving Ferrari in a dispute the year after his accident, he joined the McLaren F1 team. Years later, after hanging up his helmet, he worked in advisory roles with both the Ferrari and Mercedes teams.

He also followed a path his grandfather might have been willing to accept, entering the business world by launching his own airline, Lauda Air. But that venture was marred by a 1991 crash of one of the company’s 767 jets near Bangkok which killed all 223 people on board. 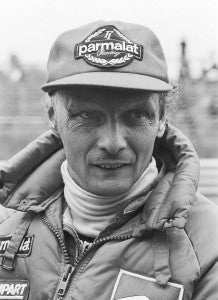 Lauda normally wore a cap after the crash to cover some of his scars. Photo courtesy Hans van Dijk.

“People always think that the worst time of my life must have been after the German Grand Prix crash in 1976,” Lauda said in a 2006 interview with another British newspaper, the Guardian. “It wasn’t.” The crash overwhelmed the former racer who spent months working Boeing and aviation authorities before finally determining the cause of the accident was a thrust reverser that inadvertently deployed, throwing the jet out of control.

Lauda sold the airline, though he would go on to start two others before his death, most recently partnering with Ryanair to launch LaudaMotion which leases executive jets.

Born February 22, 1949, Lauda was married twice. His survivors include his second wife, Birgit, and their twin children Max and Mia. Lauda also has two adult sons, Lukas and Mathias, from his first marriage.

(McLaren plans flood of new models for track and street. Click Here for the story.)