President Donald Trump has until May to either enact new tariffs on EU autos or order a delay.

With one trade war already underway, the White House could kick off another battle this weekend as the May 18 deadline nears for Pres. Donald Trump to decide whether to impose tariffs on European auto imports.

Any move would follow the completion of a Commerce Department study completed last February that concluded auto imports pose a threat to America’s national security. The president has not given a clear indication of how – or whether – he will respond as a 90-day deadline approaches, though he has had harsh words about European automakers in the past, at one point threatening to banish all Mercedes products from the streets of his home city, New York.

Auto imports from Europe totaled $56.4 billion last year, according to Commerce figures, Germany responsible for the bulk of that. The risk of new tariffs sent shares of German manufacturers BMW, Daimler and Volkswagen reeling in recent days. But even U.S. automakers, as well as suppliers and dealers, have been pressing the Trump Administration to hold back on launching a new front in the trade war.

(Trade talks with China vital to the auto industry. Click Here for the story.)

Deriding as “insulting” the claim that auto imports pose a national security threat, Howard Hakes, the president of the American International Automobile Dealers Association wrote in a blog this week that “dealers want, and deserve, official acknowledgement that our stores and our products are NO threat to the American way of life. We need a commitment from President Trump that auto tariffs – a massive tax hike on Americans looking for safe transportation – are off the table.” 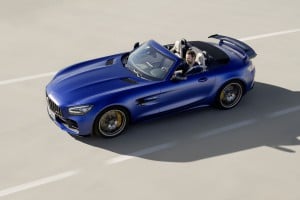 High-end European import, like this Mercedes-AMG GT R Roadster could wind up costing tens of thousands more if a 25% tariff were enacted.

The potential impact of tariffs that could rise to 25% from the current 2.5% on European autos could be substantial, increasing the cost of vehicles like the Fiat 500 or Volkswagen Golf by thousands of dollars. That could jump into the tens of thousands for highline products from brands like Mercedes-Benz or Ferrari.

In turn, groups like the AIADA warn that this would harshly impact sales, impacting thousands of jobs at import dealers across the U.S. Even American automakers and suppliers would feel the impact, especially if Europe were to retaliate, companies like Ford and General Motors have said. Among those particularly vulnerable, however are U.S.-based plants owned by foreign brands, such as the new Volvo factory in Charleston, South Carolina, and the nearby BMW assembly plant in Spartanburg that is the single-largest exporter of American-made vehicles.

While the current focus is on European auto imports, meanwhile, the White House has also warned it may take action against the Japanese, as well. Asian carmakers like Toyota, Honda and Nissan run even larger U.S.-based manufacturing networks but tariffs on auto parts imports could drive up the cost of a Camry built in Kentucky by as much as $2,000, Toyota recently warned.

As has happened in the U.S. trade war with China, European officials say they won’t sit idly by if the president orders new tariffs on European autos. 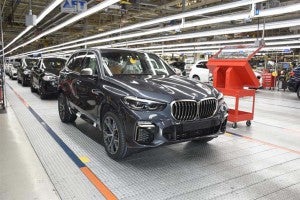 An X5 rolls off the BMW line in Spartanburg, SC. Foreign plants in the U.S. would also be impacted.

“We are already preparing a list of possible items that would be on that list,” Cecilia Malmstrom, the chief trade negotiator for the EU, said in an interview on Bloomberg Television earlier this week. “The moment this is official — if this happens, I still hope it won’t — then we would publish that list.” Malmstrom said that a response from Europe would  “happen quite rapidly.’

Whether the president will act is uncertain. Some observers question whether Trump wants to be fighting two trade battles at the same time.

“For the time being Trump will probably be busy with China and choose to extend (the May 18) deadline before escalating the conflict with the EU over cars and car imports,” Florian Hense, a European economist with Berenberg Bank, told CNBC on Wendesday.

Other analysts aren’t so sure, anticipating the president will press hard against the Europeans and that he might also demand concessions on American agricultural exports as part of any new trade deal.

What’s clear is that with the administration already waging a trade war against China, struggling to get Congress to approve the replacement for the old North American Free Trade Agreement and threatening new battles with Europe and China, the auto industry is sitting at ground zero. And the collateral damage to carmakers and car buyers could be substantial.