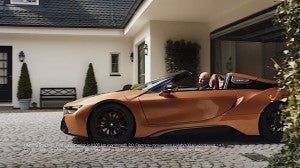 "Dieter Zetsche" drives off into retirement from Mercedes-Benz and Daimler — in his BMW i8 electric sports car.

Dieter Zetsche’s retirement from Daimler AG churned up a lot of memories for industry observers and, perhaps more importantly, competitors.

Often competitors will acknowledge notable retirements, and BMW, the primary foil for Mercedes-Benz, did just that with a short video congratulating “Dr. Z” for moving on to the next phase of his life and his contributions to the industry.

However, the Bavarian automaker couldn’t resist having a little bit of fun with the video.

It starts with a Zetsche lookalike leaving his office one last time, stopping with employees to accept well-wishes and take selfies in the lobby and turns in his ID card to the registration desk and heads out among a sea of waving hands and applause.

(Zetsche takes well-earned bow as he retires from Daimler. Click Here for the story.)

He hops into the back of a large Mercedes and as it pulls away he looks back at the building one last time. After several scenes of Germany countryside flash across the screen, he’s finally dropped off at home. He gets out, shakes hands with the driver, who then gets back in the car and drives away. 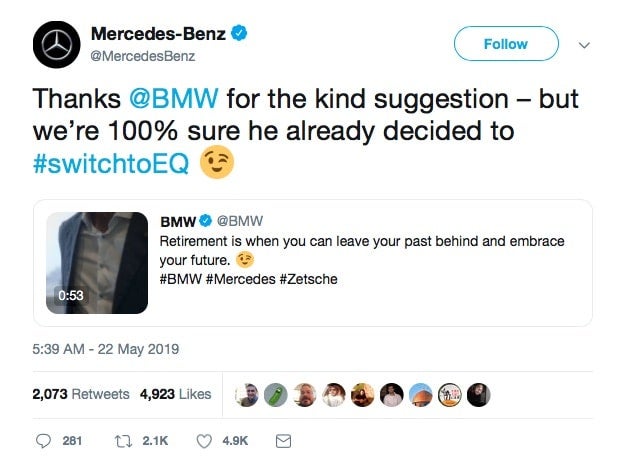 Mercedes-Benz was quick to respond via Twitter to BMW's congratulatory video.

Zetsche’s lookalike stands there – alone – for a moment, then a new scene starts with “Free at Last” scrolling across the screen and the garage door opening. Out rolls a burnt orange i8 with “Dieter” behind the wheel as he then roars off in BMW’s electric sports car.

The video fades to black with a message: “Thank you, Dieter Zetsche, for so many years of inspiring competition.”

However, that was not the end of it. Mercedes offered a response on Twitter: “Thanks @BMW for the kind suggestion – but we’re 100% sure he already decided to #switchtoEQ.”

(To see more about Zetsche’s retirement from Daimler, Click Here.)

This tit-for-tat isn’t the first time that Mercedes and BMW have poked fun at one another, according to Car and Driver magazine. In 2016 BMW celebrated its 100th anniversary. Mercedes elected to “celebrate” that milestone by inviting all BMW AG employees to come visit the Mercedes-Benz Museum so they could see “the complete history of the automobile.” Who says Germans aren’t funny?