All Grossed Out and Nowhere to Hide: Ride-Hailing Cars Nastiest

What's cleaner than a toilet? Not a rental car! 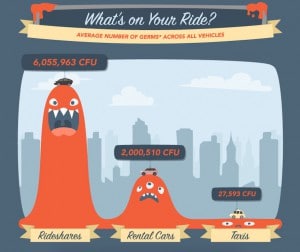 There were more than 6 million germs in the ride-hailing vehicles tested by NetQuote.com.

Rental cars are often considered almost throw away items. We’ve all heard the old axiom: People will do things in a rental car that they won’t do in their own. According to new testing, that’s not true: ride-hailing vehicles – typically owned by the driver – are the grossest thing on four wheels.

Insurance aggregator Netquote recently conducted tests to see just how nasty some modes of transport can be, specifically, taxi cabs, rental cars and ride-hailing cars. While many would have put money on the taxi being the most disgusting, those vehicles are subject to rules, including cleanliness.

Netquote swabbed the seatbelt, door handle and window buttons of three randomly picked taxis and three ride-hailing vehicles, and did the same to the steering wheel, gearshift and seatbelt of three rental cars — the touch points are different on a rental drive than on a hailed ride. The samples were sent to a lab for testing, the results were provided as colony-forming unit numbers, or CFU.

(Ride-hailing services don’t cut traffic, they add to it. Click Here for the story.)

After getting the results back, the last two letters may be what you utter before getting into an Uber, Lyft or Waymo anytime soon.

What does this mean in real terms? Well, a typical bathroom toilet seat would have around 171 CFU/sq. in. A coffeemaker is pretty nasty at 32,000 CFU/sq. in., but it’s the toothbrush holder that takes the cake at more than 2 million CFU/sq. in. Not all of the found germs are bad for you, but the more there are, the bigger the likelihood that some might be downright nasty for your health.

(Click Here for details about Lyft’s IPO depending on an autonomous future.)

The three rental cars yielded CFU levels of more than 1 million, both on steering wheels and gear levers. Seatbelts were nearly toilet clean in comparison, with just 403 CFU/sq. in. It goes from bad to unbelievably gross when ride-hailing vehicles are involved, starting with an average of 5 million CFU/sq. in. on the window controls and more than 1 million on seatbelts, with the door handles comparably clean at 1,810 CFU/sq. in. on average.

It’s also important to note that the presence of germs doesn’t necessarily equate to a dangerous situation, but the fact that they are there and in large numbers increases the odds of something — unpleasant.