VW’s New Concept Could be a U.S. Reality — But Not a Truck 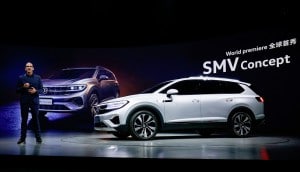 Klaus Bischoff, VW design chief, shows off the SMV Concept at Auto Shanghai. It comes to China in two years.

Though much of the news surrounding Volkswagen and new products in the U.S. focuses on the possibility of a pickup, a new concept shown thousands of miles away at Auto Shanghai may reveal what’s coming next instead: a large SUV.

VW showed off the SMV Concept, which it plans to build and sell in China within the next two years. It appears to be larger than the Atlas, which VW sells in China under the moniker Teramont. However, the SMV is based on the same flexible MQB modular architecture used by Atlas.

The automaker didn’t release any specifics about the concept. However, aside from the MQB architecture it shares with the Atlas, it will also share the Atlas powertrain. In China, it comes with a 2.0-liter TSI engine or a more powerful 2.5-liter VR6 putting out 295 horsepower and 368 pound-feet of torque.

It’s paired with a seven-speed DSG transmission and the automaker’s 4Motion all-wheel drive setup. Though officials didn’t release any specifics, it did offer up some characterizations of how it sees the SMV. 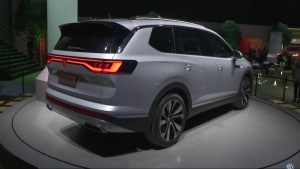 VW didn't offer any specifics on the SMV other than to reveal that it will arrive in China within two years.

“It’s about attracting buyers with something special and unique. A large SUV with an A-pillar that stretches far into the front, thereby expanding the cabin space. Sitting in this car will make people feel very superior.”

Like a few other automakers in the U.S. – most notably Hyundai and Kia – Volkswagen was late to the market with a full complement of sport-utility vehicles for all buyers. Even now it’s still not competing with the likes of the Chevrolet Suburban and Ford Expedition, which are huge profit centers for those automakers. 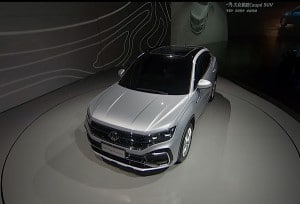 Could the SMV Concept come to the U.S. in a few years?

Understandably, VW fans in the U.S. have been teased recently by the automaker’s truck concepts. The Tanoak concept shown in New York last year and now the Tarok, which is designed for non-U.S. markets, certainly have whet their whistles.

However, with a commitment to bring the SMV to the Chinese market within two years and ostensibly the trade issues with China resolved by then, the “concept” could be reality for a U.S. market gobbling up large utes as quickly as the roll off the assembly line.