It appears that European sales of the Model 3 are going to not only help Tesla, but Fiat Chrysler as well.

Fiat Chrysler Automobiles has come up with an intriguing way to head off hundreds of millions of dollars in fines from the European Union for missing its emissions targets, a solution that will team it up with its upstart competitor Tesla.

FCA is using an “open pool” option that will allow it to count Tesla’s growing sales in Europe as if they were its own products. Tesla has used a similar approach in the United States, a move that was particularly critical in its early years.

“The whole point of a CO2 credit market is to leverage the most cost-effective ways to reduce overall greenhouse gas emissions in the market,” FCA said in a statement. “The purchase pool provides flexibility to deliver products our customers are willing to buy while managing compliance with the lowest cost approach.”

With relatively few electrified products in its line-up, Fiat Chrysler has been struggling to cope with ever-tightening emissions and fuel economy regulations in key markets such as the U.S., China and Europe. The EU will require manufacturers to drop CO2 emissions levels from a current fleet average of 130 grams per kilometer to just 95 by 2021. The automaker would have to spend billions to meet that target, or possibly eliminate sales of some key products. Alternatively, it would face large fines. 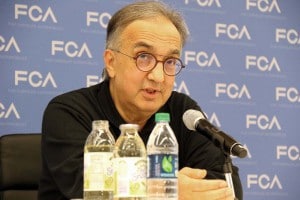 Late FCA CEO Sergio Marchionne once begged people not to buy the company's only EV, the 500e, because it was a money loser. Now it's relying on EVs from Tesla in Europe.

Tesla has been taking this approach for a number of years and, according to its latest annual report to the U.S. Securities and Exchange Commission, it earned more than $1 billion by selling credits over just the last three years alone.

Those credits were particularly important in Tesla’s early years, when it was producing only a handful of products and needed cash to tool up its factories and accelerate development of its first mainstream offering, the Model 3.

The income from the new FCA deal could prove essential for Tesla now, as well. After posting two consecutive quarterly profits for the last half of 2018, it has predicted a loss for the current quarter.

Last year, the California EV maker was focused primarily on delivering that electric sedan to U.S. customers, but as demand levels off it is expanding overseas shipments, especially to Europe. Sales of the Model 3 have been so strong in some markets that March saw battery-cars account for 58% of Norwegian new vehicle volume.

(Click Here for more about the sales reporting scandal.)

Neither FCA nor Tesla has revealed how much their open pool arrangement is worth. Nor have they disclosed how long it is set to continue.

Fiat Chrysler introduced its first all-electric vehicle, the Fiat 500e, in late 2012, but it has been a reluctant player in the zero-emissions market, the late FCA CEO Sergio Marchionne once suggesting he hoped potential buyers would steer clear of the 500e because the company lost too much on each of the ones it sold.

The Euro-American carmaker is shifting gears, however. It has generated reasonable demand for the plug-in version of its primary minivan, the Chrysler Pacifica Hybrid and, prior to his death last summer, Marchionne outlined a new, corporate five-year plan that included an array of plug-ins and pure battery-electric vehicles. These included a number of models to be sold by the high-line Alfa Romeo and Maserati brands.

But, just last month, Marchionne’s successor, Mike Manley, confirmed that at least four plug-in hybrid Jeeps are in the works, as well as new “mild” hybrids. The automaker said it is also studying options for mainstream battery-electric vehicles.

(To see more about Tesla and the SEC being told to work out their problems, Click Here.)

Such an approach could eventually obviate its need to work with Tesla.