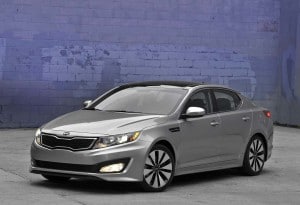 The 2011–13 Kia Optima has already been recalled once for an airbag problem.

As U.S. auto safety regulators are attempting to wind down the ongoing Takata airbag debacle, they are now investigating nearly 12.3 million vehicles with airbags that may not inflate during a collision.

The vehicles are equipped with airbags produced by ZF-TRW, according to National Highway Traffic Safety Administration, and could be responsible for as many as eight fatalities. The airbags do not inflate due to faulty control units.

(Takata airbag kills 16th person in the U.S. Click Here for the story.)

NHTSA upgraded the probe from a preliminary evaluation to an engineering analysis, which is a step closer toward seeking recalls, AP reported. Thus far, only Hyundai, Kia and Fiat Chrysler have issued recalls in the case.

Four deaths attributed to the problem were reported in Hyundai and Kia vehicles and three others occured in Fiat Chrysler vehicles. The query was upgraded to an analysis after investigators found two recent serious crashes involving 2018 and 2019 Toyota Corollas. One person was killed. Toyota said it’s cooperating in the probe, doing its own investigation and will take “any appropriate action.”

“A single supplier of an important safety component provided what appears to be a defective part across multiple manufacturers and 12 million cars,” Levine said.

“While the first fatality reports emerged three years ago, it has taken a higher body count for more significant action to be taken by NHTSA and most impacted manufacturers remain silent. The industry needs to do better.”

NHTSA said it will take “appropriate action” based on the investigation’s findings.

The auto industry has been plagued with faulty airbag issues, including Takata airbag inflators, which triggered the largest recall in U.S. history. At least 24 people have been killed worldwide and more than 200 injured by the inflators, which can explode with too much force and hurl dangerous shrapnel into the passenger cabin.