Is this the “ideal city car” for the Big Apple? 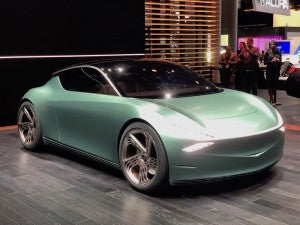 Genesis is plugging into this year’s New York International Auto Show – quite literally, with the Mint, a battery-electric city car concept making its debut at a media preview.

Targeting the likes of the now all-electric Smart fortwo, the two-seat Genesis Mint could be “the ideal city car (for) New York, suggested Manfred Fitzgerald, Executive Vice President and Global Head of the Genesis Brand.

Whether the luxury brand has specific plans to bring the Mint to market is uncertain, but company officials have confirmed they are working up a flexible battery-electric “architecture” that will be used for an assortment of future all-electric vehicles, with the first likely due to market in about two to three years.

(From minicars to $4m hypercars, Click Here to see what’s coming to the 2019 NY Auto Show.)

The Genesis Mint is definitely not a Smart clone. If anything, it looks like a downsized, albeit more up-market, take on the Hyundai Veloster, with an aggressively raked roofline and oversized tires. Quad lamps, front and back, as well as what Genesis calls a “Parabolic Line,” are meant to give the Mint a more athletic appearance than the typical city car.

Instead of a trunk, users got access to a rear parcel shelf by opening up scissor-style side openings. 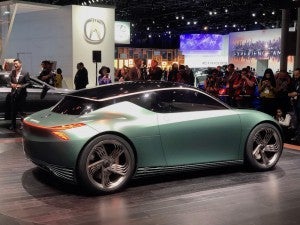 The Genesis Mint Concept takes a very different approach to urban car design from current products like the Smart fortwo.

Like other second-generation battery-electric vehicles, the two-seater rides on a skateboard-like platform that contains batteries and motors, freeing up space normally taken by the engine compartment.

That translates into a variety of places to store things around the cabin. Meanwhile, the interior features an unusual, oblong steering wheel that contains a video screen that replaces the conventional gauge cluster. Six additional, copper-framed graphic screens.

“The Mint Concept is a new urban icon that marries classic proportions with forward-looking, minimalist design,” said Luc Donckerwolke, the global design chief for parent Hyundai Motor Group. “The Mint Concept instantly finds purpose and meaning in the city, just as so many people who call the world’s most densely populated metropolises home.”

Genesis isn’t releasing much information about the Mint’s drivetrain beyond saying that the little city car would have 200 miles range and could be quickly topped off again using the newest 350 kilowatt Level 3 fast chargers.

(Click Here for a review of the Genesis G90.)

Hyundai’s spin-off luxury brand has made it a regular occasion to bring concept vehicles to the NYIAS, gaining plenty of attention with the Essentia supercar prototype it revealed at the Jacob Javits Convention Center a year ago. 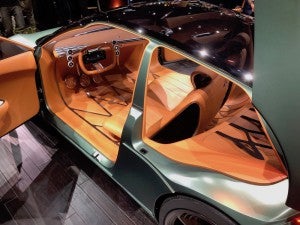 The Mint concept has a larger interior than expected and scissor doors would access its rear cargo.

Whether the Genesis Mint would actually go into production is uncertain, said Stephanie Brinley, a senior analyst with IHS Market, but it “gives them a chance to telegraph that they’ll be in the electric vehicle market, and (it lets Genesis) explore a new design language.”

Like other analysts, Brinley says it’s far more important for Genesis to focus its immediate attention on the utility vehicle segment that is rapidly displacing demand for conventional luxury passenger cars. The shift is one of the reasons why Genesis sales tumbled by more than half from the 20,594 vehicles it sold in the U.S. in 2017 to just 10,312 last year – and even then with the addition of the well-reviewed G70 sport sedan.

What could be coming to showrooms next is believed to be an SUV based on the GV80 concept that was unveiled in New York two years ago. It’s expected to be in the brand’s new standalone showrooms in time for the 2021 model-year.

The first Genesis battery-electric models aren’t expected to start rolling out for at least another year or two beyond that.

(Infiniti wants to change the way cars are designed with its Qs Inspiration Concept. Click Here for more.)