Stylish looks with ample power and comfort — a recipe for success. 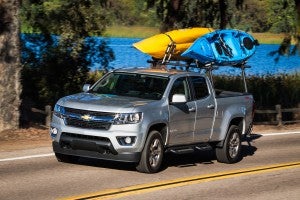 The Chevy Colorado Z71 offers a do-it-all vehicle in a growing and competitive segment.

Even with the car business facing some stiffening headwinds, trucks are still going strong and manufacturers are driving interest the segment with new models.

For example, the Chevrolet Colorado has been vital to the growth of the midsized truck market, which has expanded recently, prompting manufacturers to tinker with variants such as the one I drove recently.

The 2019 Colorado Z71 Crew Cab Short Box with four-wheel drive has a bold presence and plenty of curb appeal as well as a spirited powertrain as well as the ground clearance to ride confidently on dirt roads or even off road.

Truck are something of a challenge for designers since the pickup’s design is dictated by the truck’s utilitarian shape with its simple cab and cargo box. With its roots deep in rural America, the truck was sold as an all-purpose carry all that could handle diverse chores from carrying cargo, tools or farmhands.

(Midsize truck war may heat up fast. Click Here for the story.)

But the Z71 goes beyond the traditional appearance. The five-foot, two-inch Short Box is the key since it changes the truck’s silhouette and proportions. The change is quite dramatic and make the Colorado Z71 seem sleeker and sportier from very tip of the truck nose to the tailgate. The exterior is enhanced by a special appearance package and 17-inch wheels that give the Z71 a rugged appearance that emphasizes its capacity for travel through the backwoods.

Moreover, the Short Box isn’t just for show. It is equipped with an EZ-UP liftgate that’s easy to use and there are tie-downs inside the box for lashing in dirt bikes or other sport equipment. 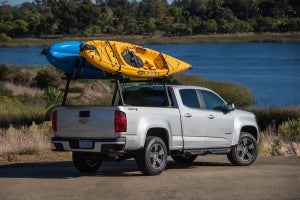 The Colorado Z71 can tow as much as 7,000 pounds when properly equipped.

I also found the interior of Colorado Z71 quite comfortable thanks to six-way adjustable seat. The driver and passenger seats are also heated and the steering wheel has been wrapped in leather.

The instrument cluster is nicely laid out and the controls in the center stack are easy to use, though the layout seems a bit dated. But there is soft material around the driver’s seat to enhance the comfort and the lighting scheme in the cabin during a night driving is quite effective.

The driving dynamics are also impressive on pavement or on dirt and gravel roads where when I had a chance to take the Z71 on some unpaved roads in open country. The suspension seemed up to the challenge and the all-wheel-drive system kept the truck steady even on loose gravel on roads that had completely recovered from punishing winter weather.

The Colorado Z71 also handled nicely even on tighter curves as the truck was building speed to enter a freeway or de-accelerating. It is also equipped with automatically locking axles for off-road travel.

(Click Here for more about the Colorado ZR2 Bison edition.)

The Z71, however, also did well on the highway. The 3.6-liter V6 engine delivers 308 horsepower and 369 foot-pounds of torque giving it plenty of power in virtually any passing situation. In addition, the six-speed transmission never seemed to miss a shift either going up or down hill.

But I did find myself wondering with General Motors downgrading their engineering for the internal combustion engine whether the powertrains used in GM’s future trucks will get the attention and improvements they need they will need in the years to come. 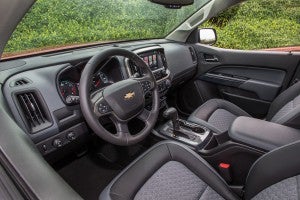 The Z71 offers plenty of power and a slew of new technology for a safe, capable and comfortable ride.

The price tag on the Z71 can tops $40,000 and the manufacturers suggested retail price for the truck I drove was closer to $42,000 once the destination charge was included.

But the 2019 Colorado Z71 is well equipped. In addition to the six airbags, it also has a rear-facing backup camera with grid lines, air conditioning, color-coded carpeting, remote start, keyless entry and power lumbar support on the seats.

It also comes with a 4G wi-fi hot spot, Apple CarPlay and Android Auto, Bluetooth, two USB ports, a satellite radio connection and GM’s OnStar system. The Colorado is also rated to tow up to 7,000 pounds, which means it can handle trailers for motorcycles, snowmobiles and fishing boats.

Most all though I found the Colorado Z71 was fun to drive. The base of 128.3 inches offers a couple of advantages as makes the Colorado easier to maneuver and park in urban and suburban traffic. At the same time the cabin is plenty of spacious. I especially like the headroom, for use on a longer driver.

But most of all it was enjoyable to sit behind the wheel and wasn’t at all tedious.