Qiantu K50 will be modified for American market. 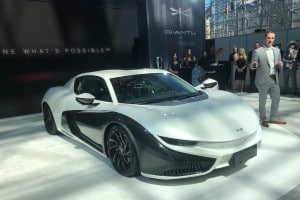 The Qiantu K50 will be produced in China, but sold in the U.S. through Mullen at a cost of $149K.

A California start-up wants to sell a Chinese-made battery-electric sports cars to American drivers, the Qiantu K50 by Mullen scheduled to make its debut in the U.S. market sometime in 2020.

With its classic, supercar silhouette, the K50 is expected to join an array of electric vehicles destined for U.S. shores that will either be produced in China or come from American factories operated by Chinese companies, such as Karma and Byton.

The new sports car, perhaps more importantly, will be part of a wave of new entries likely to reshape the perception of electric vehicles, from slow and stodgy to sleek, fast and fun-to-drive.

“We are thrilled to bring the Qiantu K50 to the North American epicenter of luxury, design and entrepreneurial spirit — New York City,” said David Michery, Mullen founder and CEO, during a preview of the electric sports car at the New York International Auto Show. 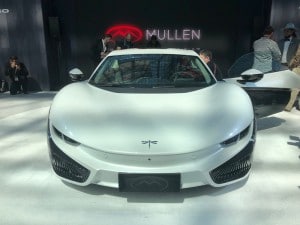 The K50 boasts a classic supercar design language, low and wide, with flared wheel arches and a sweeping roofline. But while there are two air scoops below the bumpers, the lack of a conventional grille offers an immediate hint that it doesn’t rely on a traditional, internal combustion engine. Instead, the K50 is motivated by twin, liquid-cooled electric motors, one on each axle, producing a combined 430 horsepower and 560 pound-feet of torque, enough to launch it from 0 to 60 in 4.3 seconds.

The motors draw power from a 70 kilowatt-hour lithium-ion battery pack rated for 230 miles between charges in China — though that figure is expected to come in lower using the U.S. EPA test cycle.

The K50 features what Mullen refers to as “Dynamic Torque Vectoring.” By shifting power from front to back, the K50 can enhance its ability to negotiate sharp corners and twisty roads. Its independent double-wishbone suspension further improves maneuverability.

Curiously, the pack takes the same “T” shape used early in the decade by manufacturers like General Motors in its Chevrolet Volt plug-in hybrid. That approach gobbled up interior space and raised the Chevy PHEV’s center of gravity, working against its handling. Chief Engineer McMahon said that Mullen and Qiantu opted for the approach because it reduced investment costs and also allowed for more flexibility in the K50’s overall design. 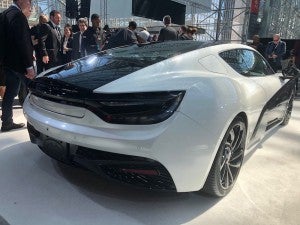 Using two electric motors, one on each axle, the K50 puts out 430 horsepower and 560 pound-feet of torque.

The K50 was initially developed by Chinese battery-car company Qiantu Motor. It is already on sale in that market, where new government regulations have prompted a massive surge in demand for electric vehicles. According to Mullen CEO Michery, there is a two-month backlog for the electric sports car.

Mullen Technologies has jumped in to serve as the U.S. representative. It will homologate – or bring up to U.S. standards – the K50. That includes not only meeting federal regulations but also improving body gaps, according to McMahon.

The American partner has set up a California production plant that will take what is essentially a knock-down kit and assemble it for the U.S. market. A number of components will be localized, according to Michery. Ironically, Qiantu currently is using batteries imported from San Francisco for the Chinese version and the American K50 will continue to rely on that same source. 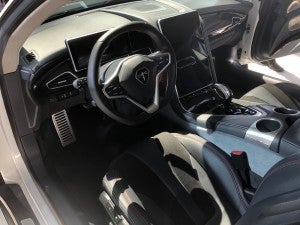 The interior looks plenty comfortable, which is good since the K50 travels 230 miles on a charge.

Plans call for the Qiantu K50 to be marketed by Mullen’s affiliate dealer network, Mullen Auto Sales, which has five high-line stores in California. It is also talking to other potential franchisees, and expects a store in Brooklyn to be open by the time the first of the sports cars reaches the U.S. next year.

First year sales are expected to come to about 1,000, with Michery predicting they will climb to 5,000 annually by 2022. He stressed that is the maximum volume Mullen intends to offer.

Meanwhile, McMahon told TheDetroitBureau.com that the partners are already working on future products, including an SUV that could launch by 2022. That model would turn to the skateboard-like platform now becoming the industry norm. By moving batteries, motors and other components under the floorboards, that would yield significantly greater interior space and further enhance vehicle dynamics.